Getting What You Celebrate... 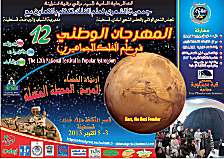 The 12th Edition of the National Festival in Popular Astronomy
Year after year since 2001, the National Festival in Popular Astronomy is held for the benefit of the public at large. In this twelfth edition we shall focus on the planet exploration and more particularly the red planet Mars.. From Viking to pathfinder to Opportunity to Curiosity. There is indeed a new momentum to go for Mars which has captured people's imagination. It is a technological endeavor which soon enough will have a human counterpart and already astronauts have been selected to become in due time Mars ready! Many activities will take place during this edition both high level and for the general public has made it throughout the years a much sought astronomical rendezvous. Like usual, this year come with its share of surprises, not the least a portable planetarium which will make great animation with the public....


Sirius: 12th National Festival in Popular Astronomy
Posted by physics4thecool at 4:00 AM