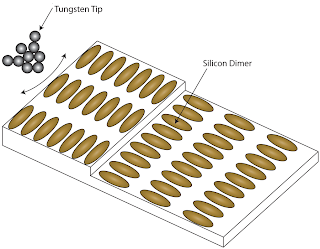 A new experimental method based on atomic force microscopy allows the investigation of friction at the scale of individual atoms.
Everyone learns the basics of friction in high-school physics classes: the friction force experienced by a sliding object is proportional to the normal force that an object exerts on a surface. Remarkably, this extremely simple and empirical relation, known as Amontons’ Law, is still often used in creating the most technologically sophisticated machines and devices, even though friction is known to vary with a large number of other parameters not captured in this relation. For example, at the nanoscale, friction is significantly influenced by adhesion, an example where Amontons’ Law cannot predict the friction force [1]. Likewise, friction can depend on sliding speed, duration of contact, environment, temperature, and the sliding direction [1, 2]. As reported in Physical Review Letters, Jay Weymouth and colleagues at the University of Regensburg in Germany have investigated the friction force at atomic length scales, using an atomic force microscope (AFM) [3] to probe the forces between a tungsten tip coated with a small amount of silicon, sliding on the surface of crystalline silicon. They report an observation never before obtained at the scale of just a few atoms: friction is strongly dependent on the orientation of specific silicon atomic bonds at the surface with respect to the sliding direction of the tip.
A directional dependence of friction, also known as friction anisotropy, has been previously observed on larger scales (at least a few nanometers). For example, a tip was pulled along a molecular layer where the molecules were locally all tilted in the same direction. Sliding along the tilt axis produced lower friction than when sliding perpendicular to it [4]. A similar behavior can be observed in a simple way by pressing one’s hands together (as if in prayer but with the fingers spaced apart). Upon sliding the fingers of the left hand against the fingers of right hand (perpendicular to the long axis of your fingers), the fingers of one hand become stuck in between those of the other. However, if one instead slides the left hand down and the right hand up (parallel to the long axis of your fingers), the hands move smoothly. The relative orientation between the sliding direction and the grooves of one’s fingers influences friction because of the geometry of our hands. Friction anisotropy has been observed by sliding a small tip on atomically flat and well-characterized surfaces [5]. However, in all these cases, the nanometer-size tip was pressed into contact with the surface, meaning that a large number (at least thousands) of atoms were in contact during this experiment.
American Physical Society: Friction at the Atomic Scale
Posted by physics4thecool at 4:00 AM