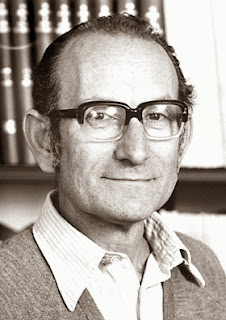 The Nobel Prize in Physiology or Medicine 1984
Niels K. Jerne, Georges J.F. Köhler, César Milstein
César Milstein
Born: 8 October 1927, Bahia Blanca, Argentina
Died: 24 March 2002, Cambridge, United Kingdom
Affiliation at the time of the award: MRC Laboratory of Molecular Biology, Cambridge, United Kingdom
Prize motivation: "for theories concerning the specificity in development and control of the immune system and the discovery of the principle for production of monoclonal antibodies"
My father was a Jewish immigrant who settled in Argentina, and was left to his own devices at the age of 15. My mother was a teacher, herself the daughter of a poor immigrant family. For both my mother and my father, no sacrifice was too hard to make sure that their three sons (I was the middle one) would go to university. I wasn't a particularly brilliant student, but on the other hand I was very active in Student Union affairs and in student politics. It was in this way that I met my wife, Celia. After graduation, we married, and took a full year off in a most unusual and romantic honeymoon, hitch-hiking our way through most countries in Europe, including a couple of months working in Israel kibbutzim. As we returned to Argentina, I started seriously to work towards a doctoral degree under the direction of Professor Stoppani, the Professor of Biochemistry at the Medical School. My PhD thesis work was done with no economic support. Both Celia and I worked part-time doing clinical biochemistry, between us earning just enough to keep us going. My thesis was on kinetics studies with the enzyme aldehyde dehydrogenase. When that was finished, I was granted a British Council Fellowship to work under the supervision of Malcolm Dixon.
Nobel Prize:

Biographical, Nobel Lecture, Documentary (1 min)
Posted by physics4thecool at 4:30 AM