Note: Originally planned for next Friday. Due to current circumstance, this post was moved up.


Fascism, political ideology and mass movement that dominated many parts of central, southern, and eastern Europe between 1919 and 1945 and that also had adherents in western Europe, the United States, South Africa, Japan, Latin America, and the Middle East. Europe’s first fascist leader, Benito Mussolini, took the name of his party from the Latin word fasces, which referred to a bundle of elm or birch rods (usually containing an ax) used as a symbol of penal authority in ancient Rome. Although fascist parties and movements differed significantly from one another, they had many characteristics in common, including extreme militaristic nationalism, contempt for electoral democracy and political and cultural liberalism, a belief in natural social hierarchy and the rule of elites, and the desire to create a Volksgemeinschaft (German: “people’s community”), in which individual interests would be subordinated to the good of the nation. At the end of World War II, the major European fascist parties were broken up, and in some countries (such as Italy and West Germany) they were officially banned. Beginning in the late 1940s, however, many fascist-oriented parties and movements were founded in Europe as well as in Latin America and South Africa. Although some European “neofascist” groups attracted large followings, especially in Italy and France, none were as influential as the major fascist parties of the interwar period. Source: Britannica dot com/fascism


“Fascism should more appropriately be called Corporatism because it is a merger of state and corporate power.”
― Benito Mussolini (attributed with dispute) Good reads


In his dystopian novel, "The Man in the High Castle," Philip K. Dick (1962 book and current Amazon series) envisioned a world where the Axis powers won WWII. The only mention of Italy is Germany helped them conquest most of North Africa. The new world order seventeen years after the war divided what was America into territories dominated by Germany on the east coast, Japan on the pacific west coast and a lawless, Midwest "no man's land." Each dominant group considers itself the "master race," and contests over possession of "the Heisenberg device," what the atomic bomb might have been called had America not succeeded at the Manhattan Project. Except for a lot of chutzpah and good luck, this was almost the case. The Normandy Invasion almost didn't happen, or could have been a disastrous failure. It shaped the current world that through tweet and tariffs on our allies we see crumbling around us.


Highly esteemed corporations like International Business Machines, Charles and David Koch's father, Fred did business directly with Germany and Russia during and after the conflict. African Americans, Asians, Hispanic/Latinos and Native American "code talkers" fought and died along with their segregated, dominating fellows not for "life, liberty and the pursuit of happiness," but a choice of evils: for people of color, the Second World War was no different than the first. Two racist nations were at war with each other, and POC made a "choice": lynchings, or ovens. Eugenics was born on these shores, and inspired Adolf Hitler and the National Socialists' darkest imaginations. Before the 2016 elections, the US right had given up on democracy and lauded Vladimir Putin. Their fears of being numerically irrelevant circa 2042 might plant the seeds in a fresh soil of feces and collusion. All prior pretense of piety and "values" are gone now.


Ironically, Charlie Chaplin thought Adolf Hitler was one of the greatest actors he’d ever seen.


In 1940, Charlie wrote, directed, and produced The Great Dictator, his first talking movie. Producers didn’t want to rock the boat with Germany and Italy; they tried to keep the movie from being released. Hollywood producers were also afraid Chaplin’s movie might damage foreign relations and hurt the Jewish population in Europe.


On the other hand, President Franklin D. Roosevelt thought it was a very important movie and assured Charlie that he’d see to it that the movie was released.


Chaplin produced the movie entirely with his own money. He created The Great Dictator to instigate laughter at Hitler–to show the world the Nazi party didn’t count. Chaplin discounted the Nazi party while challenging Hitler’s dictatorship, not knowing the atrocities taking place at the hands of Hitler and the Nazi party.


When Chaplin became aware of the death and destruction in Europe, he edited his movie to reflect on issues that were more serious. Charlie thought if he could talk from his heart in his movie, he might have an effect on shortening the war; therefore, he was constantly rewriting the script in order to be able to develop something profound to say to his motion picture viewers.


The Nazi party thought Charlie Chaplin was Jewish though there wasn’t any record that he was, or wasn’t. They created anti-Jewish newsreels based on Chaplin’s visit to Berlin. They called him a ‘disgusting Jewish acrobat.’ Source: Healthy Habits, George Zapo


They may master the current medium of the times (radio, Twitter) and gain the attention of millions. Through celebrity, brashness and blatant racism, they may command a cult following. For fear of being numerical minorities, globalization and supposed mediocrity, some have sold their souls to a Russian devil. Election parties post a questionable "election" may include colorful mob characters named Joey No Socks. Democratic norms whither under their ceaseless attacks on the rule of law, PRETENDING to be the rule of law while daily breaking many, along with crimes against humanity.


Before the ovens were fired, the undesirable are sequestered in ghettos, segregated from the rest of "us"; children locked away in an abandoned Walmart.


Sometime monsters are first seen as jokes...until the first ovens are fired.


The only product hate can ultimately produce...is death. 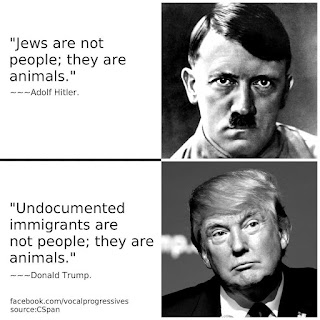