New York Magazine (the home state of our current orange nightmare) couldn't be more stark: your futures are being determined by ossified, geriatric creatures that KNOW they will not live to see the impact of their disastrous decisions on the environment, stoking wars, cutting taxes for their wealthy benefactors and themselves (ballooning the federal deficit); packing the Supreme Court with right wing, misogynist and sexist ideologues that don't hold your views on fairness, equality and will influence your lives for at least two generations. Along with subverting our electoral process in 2016 with Russia, the cover up of the apparent murder and brutal dismemberment of Jamal Khashoggi (15 must be the "magic number" in Saudi Arabia). This may tie to Jared Kushner being in the Saudi prince's "pocket," usually meaning he owes him, likely for a business loan that salvaged his New York property, ominously addressed "666 Fifth Avenue." Whether agnostics, atheists or theists, that's a lot to digest. I list these concerns because you will only get older, and the world they're destroying you will inherit, in whatever condition it's left in, however long it lasts.


Notice the message is fear: I saw a commercial warning of socialism, open borders, MS-13 paid for by a conservative PAC. I saw a bus load of seniors in Georgia getting on a bus to vote being stopped for no crime other than voting. Native Americans in North Dakota are having their votes blocked by legal fiat. Note the distinct dichotomy in the definitions of democracy and fascism - they're obviously leaning towards the latter. Parkland shooting survivors and their activism terrifies them. Since 2015, it's been observed they are getting older and dying off. The heady days of Ronald Reagan taking 61 to 30 voters between 18 to 24 is well-past their better days and jump shots. A lot of things back then aligned with that popularity: nostalgia was "Laverne and Shirley"; "Happy Days" "Back to the Future" and "Family Ties" with Michael J. Fox as a young urban professional - conservatism was "cool" but it's overstayed its shelf life. Democracy only worked for them when they were in the numerical majority - the tables turn circa 2042, and by the blatantly demonstrable voter suppression activities WITHIN the United States, they're panicking early now. The ONLY way they can stay in power is to suppress the youth and minority vote, and maybe collude with a foreign power.


Speaking of the environment: we're losing insects around the world at an alarming rate due to climate change. The meddlesome critters are an important part of our food chain, which if you're capable of reading this post, you're squarely at the top of it. Destroy the foundation - it eventually drives up the price of food, then inhibits the access to it. That is a recipe for starvation, poverty, hyper income inequality, wars...and extinction.


The capitalized term First Contact, in Human context, was used to specifically refer to the first official publicly and globally known contact between Humans and extraterrestrials. The First Contact took place on the evening of April 5, 2063, when a Vulcan survey ship, the T'Plana-Hath, having detected the warp signature of the Phoenix, touched down in Bozeman, central Montana, where they met with the Phoenix's designer and pilot, Zefram Cochrane. This event was generally referred to as the defining moment in Human history, eventually paving the way for a unified world government and, later, the United Federation of Planets. The event also became an annual holiday called First Contact Day. Memory Alpha - First Contact


I've always been dubious about this platitude in Trek mythology, that somehow knowing that we're "not alone" in the universe was some kind of unifying force multiplier to eternal (and secular) Kumbaya and Koinonia. The screaming at immigrant children at the border BEFORE the 2016 elections and kiddie concentration camps now leave my optimism in doubt. Roddenberry was playfully imaginative, but Pollyannish at best.


Star Trek was born in the 1960s as was the Civil Rights movement, which involved hoses, bricks, fire bombings and assassinations. It was during the Cold War with (ironically) Russia, and the notion that "duck and cover" drills wouldn't ultimately save us from extinction. So, it was a brief respite from the existentialism that gripped most in those days. Someone who looked like us might survive our own pride and hubris. There could be life after half-life.


The belief that everything in the universe is part of the same fundamental whole exists throughout many cultures and philosophical, religious, spiritual, and scientific traditions, as captured by the phrase 'all that is.' The Nobel winner Erwin Schrödinger once observed that quantum physics is compatible with the notion that there is indeed a basic oneness of the universe. Therefore, despite it seeming as though the world is full of many divisions, many people throughout the course of human history and even today truly believe that individual things are part of some fundamental entity.


People who believe that everything is fundamentally one differ in crucial ways from those who do not. In general, those who hold a belief in oneness have a more inclusive identity that reflects their sense of connection with other people, nonhuman animals, and aspects of nature that are all thought to be part of the same "one thing." This has some rather broad implications.


First, this finding is relevant to our current fractured political landscape. It is very interesting that those who reported a greater belief in oneness were also more likely to regard other people like members of their own group and to identify with all of humanity. There is an abundance of identity politics these days, with people believing that their own ideology is the best one, and a belief that those who disagree with one's own ideology are evil or somehow less than human.


It might be beneficial for people all across the political spectrum to recognize and hold in mind a belief in oneness even as they are asserting their values and political beliefs. Only having "compassion" for those who are in your in-group, and vilifying or even becoming violent toward those who you perceive as the out-group, is not only antithetical to world peace more broadly, but is also counter-productive to political progress that advances the greater good of all humans on this planet.


Quaint, and for a better time, but until we get there...


65,853,625 voted for the sane (though, maybe not desired) candidate.
62,985,105 voted for the orange fascist tweeting on the loo and defecating from his pie hole in a breathtaking achievement of daily, all-time Olympic-level lying.


"You belong to your father, the devil, and you want to carry out your father’s desires. He was a murderer from the beginning, not holding to the truth, for there is no truth in him. When he lies, he speaks his native language, for he is a liar and the father of lies." John 8:44 NIV (yes, I'm trolling)


This election, I'm asking the "silent majority"...to give a shit. It's literally your futures. 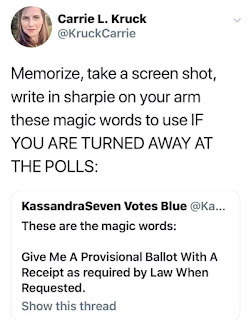 Move On dot org: Check if You Are Registered to Vote or Get an Absentee Ballot

"Unless someone like you cares a whole awful lot,
Nothing is going to get better. It's not."
― Dr. Seuss, The Lorax
Posted by physics4thecool at 2:00 AM