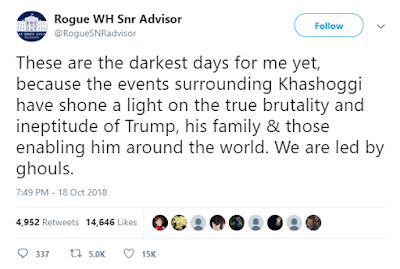 1 : a legendary evil being that robs graves and feeds on corpses
2 : one suggestive of a ghoul
especially : one who shows morbid interest in things considered shocking or repulsive Merriam-Webster

1
a : a viewpoint that traditional values and beliefs are unfounded and that existence is senseless and useless
Nihilism is a condition in which all ultimate values lose their value.
— Ronald H. Nash
b : a doctrine that denies any objective ground of truth and especially of moral truths
2
a : a doctrine or belief that conditions in the social organization are so bad as to make destruction desirable for its own sake independent of any constructive program or possibility
b capitalized : the program of a 19th century Russian party advocating revolutionary reform and using terrorism and assassination Merriam-Webster


MOSCOW (AP) — A security aide to Yevgeny Prigozhin, a Russian businessman who has been indicted by American investigators for allegedly trying to interfere with the 2016 U.S. election, says the mogul has been involved in attacks on several people and at least one killing, an independent Russian newspaper reported Monday.


Prigozhin has been dubbed “Putin’s chef” for organizing catering events for Russian President Vladimir Putin and even personally serving him and his guests on some occasions.


The Novaya Gazeta article Monday by reporter Denis Korotkov came out several days after unknown people sent a funeral wreath to the journalist’s home and left a basket with a severed goat’s head at the newspaper’s office.


Korotkov’s article relies on several interviews with Valery Alemchenko, a former convict who worked for Prigozhin. Alemchenko said he orchestrated attacks on Prigozhin’s opponents as well as the killing of an opposition blogger in northwest Russia, all at the mogul’s behalf.


According to the Crime Museum's web site, the third early sign of a serial killer is the mutilation of animals. Apparently in Moscow, it's a key job description.


We cherish, as well as take our freedoms for granted. If the death of Jamal Khashoggi is not investigated by the UN; if the extra judicial killings in and by Russia is not backed up with stiffer sanctions, it is a matter of time before it's tried on these shores. If the suspicious deaths of low-level bloggers or reporters are met with collective shrugs, the First Amendment will at that point in history have been fed through a shredder. It matters not which Amendment is your "favorite," for those of our citizenry that cannot count beyond the 2nd: The Constitution for all intents and purposes is at that point worthless toilet paper for the dung hill America will have become.


Congress shall make no law respecting an establishment of religion, or prohibiting the free exercise thereof; or abridging the freedom of speech, or of the press; or the right of the people peaceably to assemble, and to petition the government for a redress of grievances. Cornell Law


'I told you, Winston,' he said, 'that metaphysics is not your strong point. The word you are trying to think of is solipsism. But you are mistaken. This is not solipsism. Collective solipsism, if you like. But that is a different thing: in fact, the opposite thing. All this is a digression,' he added in a different tone. 'The real power, the power we have to fight for night and day, is not power over things, but over men.' He paused, and for a moment assumed again his air of a schoolmaster questioning a promising pupil: 'How does one man assert his power over another, Winston?'


Winston thought. 'By making him suffer,' he said.


'Exactly. By making him suffer. Obedience is not enough. Unless he is suffering, how can you be sure that he is obeying your will and not his own? Power is in inflicting pain and humiliation. Power is in tearing human minds to pieces and putting them together again in new shapes of your own choosing. Do you begin to see, then, what kind of world we are creating? It is the exact opposite of the stupid hedonistic Utopias that the old reformers imagined. A world of fear and treachery is torment, a world of trampling and being trampled upon, a world which will grow not less but more merciless as it refines itself. Progress in our world will be progress towards more pain. The old civilizations claimed that they were founded on love or justice. Ours is founded upon hatred. In our world there will be no emotions except fear, rage, triumph, and self-abasement. Everything else we shall destroy everything. Already we are breaking down the habits of thought which have survived from before the Revolution. We have cut the links between child and parent, and between man and man, and between man and woman. No one dares trust a wife or a child or a friend any longer. But in the future there will be no wives and no friends. Children will be taken from their mothers at birth, as one takes eggs from a hen. The sex instinct will be eradicated. Procreation will be an annual formality like the renewal of a ration card. We shall abolish the orgasm. Our neurologists are at work upon it now. There will be ...no loyalty, except loyalty towards the Party. There will be no love, except the love of Big Brother. There will be no laughter, except the laugh of triumph over a defeated enemy. There will be no art, no literature, no science. When we are omnipotent we shall have no more ..need of science. There will be no distinction between beauty and ugliness. There will be no curiosity, no enjoyment of the process of life. All competing pleasures will be destroyed. But always -- do not forget this, Winston -- always there will be the intoxication of power, constantly increasing and constantly growing subtler. Always, at every moment, there will be the thrill of victory, the sensation of trampling on an enemy who is helpless. If you want a picture of the future, imagine a boot stamping on a human face -- for ever.'


An obvious fan of the illegitimate president* sent pipe bombs to a specific enemies list: Joe and Jill Biden, John Brennan, Bill and Hillary Clinton, Robert De Niro, Eric Holder, Barack and Michelle Obama, Debbie Wasserman Schultz, Maxine Waters and the staple of conspiracy theorists, George Soros. They apparently threw in Governor Andrew Cuomo and CNN where his little brother works to round out the list. This is how they look mind you, when they WIN (by hook, or Russian crook). It might have something to do with vitriolic rhetoric of the media as "the enemy of the people," chants of "lock her up," praising Neo Nazis at Charlottesville and a congressman for body slamming a reporter. Just saying...


The blueprint of the dystopian by Eric Blair (George Orwell was his pen name) seems daily revealed, slowly with increasing frequency. The author hinted at any totalitarian regime that was in vogue at the time of his brief life (he died after the publication in 1949). It could be Nazis, it could be the Soviets; it could be George Lincoln Rockwell (Richard Spencer looks like he purposely cloned himself after him) in a Philip K. Dick dystopia - "The Man in the High Castle," currently in its third season on Amazon Prime. The date 1984 was merely a nod to the future. There are many theories on the origin of the novel's name. It targets no specific epoch for when a society essentially experiences entropy: it merely darkly illustrates what such a society might look like. So does "The Handmaid's Tale" by Margaret Atwood (on Hulu); "The Parable of the Sower" and "The Parable of the Talents" by Octavia Butler (that SHOULD be made into movies, or a series). Though their endings are grim, the relief for the reader is it is a complete fantasy. S/he is comforted that such an event can never happen in modern times and understanding of democratic republics, and promptly orders a soothing latte. Before the anarchy of authoritarianism, it must be fueled by apathy.


Yesterday and today [ominously, the date of the article is November 9, 2012] mark the 74th anniversary of Nazi Germany's state-instigated pogroms known as Kristallnacht (Night of Broken Glass), a turning point in Hitler's anti-Jewish policy. For most scholars, it marks the beginning of the period we now define as the Holocaust.


Nazi militants destroyed thousands of stores and Jewish homes, desecrated cemeteries and burned down hundreds of synagogues. German Jewish citizens were arrested, systematically humiliated and abused in public in every city, town and village of Germany and in the recently annexed Austria. The majority of German citizens were bystanders to the pogrom and did not try to prevent the vandalism and destruction.


The events of Kristallnacht teach a valuable lesson. They show that a modern society can become numbed to the fate of its minorities. Since Hitler's rise to power in March 1933, Jews had been classified and categorized as "others." They were demonized, legally discriminated against and spatially segregated. Non-Jewish Germans were increasingly convinced that the treatment of Jews was justified and did not concern them. Remembering Kristallnacht: It starts with apathy, Alejandro Baer, Star Tribune


I will make this my last post before November 5 and 6, 2018 (literally: Judgment Day). Our country will either be a referendum against creeping fascism, or an endorsement of it. Putin has boldly proclaimed our better days are behind us, mocking the United States and orange shit stain to John Bolton's face. The KGB master spy's ideal is likely a return to serfdom on a global scale, with figurehead potentates reporting into him as kingpin crime boss, the "strongmen" maintaining control with fear, division and xenophobia. William Shakespeare said "what's past is prologue," and since the future is ours to shape, it doesn't have to be an inevitable slide to tyranny. This is a time to early vote, then canvas; then call until the last minute - until the last breath. This is the election of not just our lifetimes, but the lifetimes of our posterity yet born, for a world they'll inherit that will be habitable, or not; a world that will be fairer to people of color, our daughters, our LGBT relatives, immigrants... or, not. We've all lived through the low turnouts of the 1994 and 2014 midterms, near and distant history that have shaped this current crisis now. This is NOT a time for the indifferent, haughty bench warmers or the "too woke" to vote. The apathetic need to get out of the way of The Indivisible. If we lose this one, we all lose a nation and our place as the world's last, best hope.


Those remaining in that dark aftermath of a dangerous, unsure world are usually ordered about the remainder of their short days by zombies, Nazis...or, ghouls.


Move On dot org: Check if You Are Registered to Vote or Get an Absentee Ballot

"Unless someone like you cares a whole awful lot,
Nothing is going to get better. It's not."
― Dr. Seuss, The Lorax