This week was epic crazy, but republics have done crazy before.


The third of Rome’s emperors, Caligula (formally known as Gaius) achieved feats of waste and carnage during his four-year reign (A.D. 37-41) unmatched even by his infamous nephew Nero.


After Germanicus died in 17 A.D., Caligula’s family fell from favor in the eyes of the emperor Tiberius and the powerful Praetorian guardsman Sejanus, who saw the elder sons of the popular general as political rivals. Caligula’s mother and brothers were accused of treason, and all died in prison or exile. Caligula’s grandmother Antonia managed to shield him from these intrigues until Sejanus’ death in 31. The next year, Caligula moved in with the aging Tiberius, who gleefully indulged his great-nephew’s worst habits, commenting that he was “nursing a viper in Rome’s bosom.”


Tiberius adopted Caligula and made him and his cousin Gemellus equal heirs to the empire. When the emperor died in 37, Caligula’s Praetorian ally Marco arranged for Caligula to be proclaimed sole emperor. A year later, Caligula would order both Marco and Gemellus put to death.


Caligula was not quite 25 years old when he took power in 37 A.D. At first, his succession was welcomed in Rome: He announced political reforms and recalled all exiles. But in October of 37, a serious illness unhinged Caligula, leading him to spend the remainder of his reign exploring the worst aspects of his nature.


Caligula lavished money on building projects, from the practical (aqueducts and harbors) to the cultural (theaters and temples) to the downright bizarre (requisitioning hundreds of Roman merchant ships to construct a 2-mile floating bridge across the Bay of Bauli so he could spend two days galloping back and forth across it). In 39 and 40 he led military campaigns to the Rhine and the English Channel, where he eschewed battles for theatrical displays, commanding his troops to “plunder the sea” by gathering shells in their helmets).


He picked a fight with Denmark, the Prime Minister his latest strong, intelligent woman he's called "nasty." He has apparently usurped deity and Jedi Knight masters, though it would be entertaining to see if he attempts "force-walking" over still waters. I'm not putting it past him, I just have more confidence in gravity.


The hashtag Antichrist is trending on his favorite social media platform. There's a few conspiracy theory sites up, just as there were for President Bush and President Obama. People are dusting off their Bibles and researching scripture.


He's headed to the G7 summit (what can POSSIBLY go wrong?) to represent US interests, who've pointedly decided to not issue a statement for the first time. He wants Russia (the people and strongman stooge he refuses to insult) back in the august body after being punished for invading Crimea.


This is the same person that descended the escalator in Trump tower. His opponent, Secretary Hillary Clinton used a quote by Dr. Maya Angelou: "when someone shows you who they are, believe them the first time!"


He is mentally ill, and his sociopathy is understandably exhausting. The Al Wilson song "The Snake" he misappropriates to castigate immigrants is both projection and Freudian slip.


One of the first psychiatrists who sounded the alarm over Donald Trump's state of mind has expressed renewed concern that the president's recent pronouncements show his cognitive abilities are deteriorating.


This week, Trump canceled a planned state visit to Denmark after the country's prime minister refused to countenance his idea of the U.S. purchasing Greenland, the European nation's autonomous territory. He later described Mette Frederiksen's statement as "nasty."


In addition, under fire for saying Jewish-Americans who vote for Democrats showed a "total lack of knowledge or great disloyalty," a comment criticized as an anti-Semitic trope, Trump shared a message from conspiracy theorist Wayne Allyn Root, who said Israeli Jews love the president like he is "the second coming of God."


Later on Wednesday, Trump appeared to repeat the theme on the south lawn of the White House, where he said he was the "chosen one" in his trade spat with China.


He's the master of distraction, his only real talent. It's similar to his calling in and pretending to be his own publicist, John Barron et al, extolling the "virtues" of Donald Trump. It's similar to his manipulation of New York tabloids. It's just on steroids every time he has a bowel movement during "executive time" and flies his fat little fingers on Twitter. His hubris has merely been digitized.


But we've been lucky. Damned lucky. There hasn't been a 9-11 attack, minus the digital one on our sovereignty to pick our own leaders. We had Hurricanes fueled by climate change - see Puerto Rico. Hurricanes Katrina and Rita were existential crises that plummeted the popularity of Bush and his political party. The war-of-choice in Iraq didn't help and increased the chances of his successor not being Senator John McCain (R.I.P.), but any democratic candidate, it just so happened the one in 2008 was historic.


My comfort: Dr. Rachel Bitecofer is a name and political scientist you should become familiar with.  She predicted the Blue Wave in the 2018 midterms and predicts a 278 electoral college victory over Orange Satan's 197. The biblical forty and two months reign would be about right for this Antichrist, as in not Christian by a long shot.


I'm motivated to vote in 2020, and so should you be. It would let Jeff Tiedrich get back to his day job. It would lower all our blood pressures, including his. 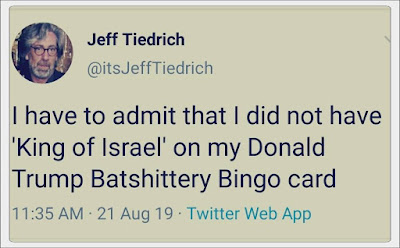