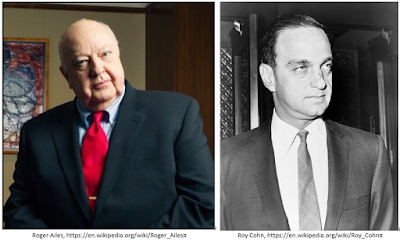 
Republican media strategist Roger Ailes launched Fox News Channel in 1996, ostensibly as a "fair and balanced" counterpoint to what he regarded as the liberal establishment media. But according to a remarkable document buried deep within the Richard Nixon Presidential Library, the intellectual forerunner for Fox News was a nakedly partisan 1970 plot by Ailes and other Nixon aides to circumvent the "prejudices of network news" and deliver "pro-administration" stories to heartland television viewers.


The memo—called, simply enough, "A Plan For Putting the GOP on TV News"— is included in a 318-page cache of documents detailing Ailes' work for both the Nixon and George H.W. Bush administrations that we obtained from the Nixon and Bush presidential libraries. Through his firms REA Productions and Ailes Communications, Inc., Ailes served as paid consultant to both presidents in the 1970s and 1990s, offering detailed and shrewd advice ranging from what ties to wear to how to keep the pressure up on Saddam Hussein in the run-up to the first Gulf War.


Near the beginning of “Where’s My Roy Cohn?” the new documentary about the lawyer and power broker who mentored Donald Trump, an interviewee says, “Roy Cohn’s contempt for people, his contempt for the law, was so evident on his face that if you were in his presence, you knew you were in the presence of evil.” He wasn’t being hyperbolic.


In the 1950s, as chief counsel to Senator Joseph McCarthy, Cohn wasn’t just a key player in the anti-Communist witch hunts of the time. He also persecuted men in the State Department who were suspected of being gay, despite being a closeted gay man himself. Later, he became a consigliere to New York’s mafia families, some of whom also had ties to Trump, even as he ranted about law and order.

Roy Cohn Is How We Got Trump
From McCarthyism to the mob to Trump, Cohn enabled evil.
Why did elites embrace him?
Michelle Goldberg, New York Times


More than four years into the experience, Trump can now pull a stunt that would have obliterated any previous politicians’ career before sundown and get away with it, because it’s incrementally more of exactly what he has been doing since he rode that golden escalator into this elongated infamy we now endure.


This is part and parcel of creeping fascism. An instance of horrifying racism becomes merely “expected” from the president, and then he moves on to another one, and then another, and another after that. He and his administration are laboring to normalize the grotesque.


Trump’s Racism Is Not Blundering — It Is Tactically Deliberate
William Rivers Pitt, Truth Out


History is the scaffold for the present.


Though Washington, DC was designed by the genius (and likely, closeted) African American Benjamin Banneker, it is, as of 2019, applying the umpteenth time for statehood. Moscow Mitch will block it as the grim reaper of all things decent, because it will "give an advantage to democrats." True. The District of Columbia will gain two senators and as long as we insist upon the anachronism, the slave state favoring electoral college. It should be extended to Puerto Rico, Guam and other territories. It is a tacit admittance the GOP's policies aren't attractive to a large swath of the population. Hence, the best way to win is to block, inhibit, intimidate, purge, voter ID or otherwise Russian-hack the vote.


We are here because we never dealt with the nation's demons of Native American genocide and land theft. We are here because we told ourselves captive, silly myths about enslaving Africans was "Christianize-ing the savages," and further logical fallacies about not needing to pay the descendants of centuries-free labor reparations.


Not withstanding the poignant observations of his college professor, the one thing he's studied and mastered brilliantly is chaos and division. It's the genius of feral instinct, not unlike a rodent in survival mode.


We are here because of the words "We hold these truths to be self-evident, that all men are created equal." If they had simply added the modifier "White Anglo Saxon Protestant Cisgender Male," the matter would have been clarified. There would have been no 13th, 14th, 15th or 19th Amendments; Shirley Chisholm, Hillary Clinton, Harvey Milk, Barack Obama or Pete Buttigieg.


We are here because one man is a disciple of Roger Ailes and Roy Cohn's dark arts - either directly or indirectly - he's expertly mimicked their panache for not telling the truth to Olympian heights, and fabricates the reality he would rather than is. He has a ready-made audience of anti-vaxxers, conspiracy theorists, climate change and science deniers. He has a bully charm to elicit the same behaviors from his minions - either fall in line, or be turned on in a tweet.


My acerbic commentary on Facebook regarding the article by John Fea "Why is Christian America Supporting Donald Trump?":


Because the first supremacy on this soil was Christian supremacy: it takes balls and psychopathy to slaughter the same First Nation people who kindly got them through their first winter. Many colonists resorted to cannibalism - look it up. It made it easy to kidnap Africans whose agricultural expertise made the colonists richer than sultans and kings. Many a lynch mob were the same people who read the good book minutes before the barbarous act, and many “Christian” masters sired Mulatto children or practiced “buck breaking” - raping male slaves to dehumanize them in front of their families, despite in either case being married with children and in many cases, “ministers.”


The veil is just off. This is who they’ve always been.
Posted by physics4thecool at 5:24 AM