It is interesting to reside in New York in such times. New York is, after all the center of media and commerce. After experiencing an earthquake on Tuesday, and Hurricane Irene the next weekend, I stated "nothing could surprise me"; Superman or Spiderman could swoop by. Then, a balloon landed on the road from work the very next weekend! (Be careful what you ask for...or SAY!) 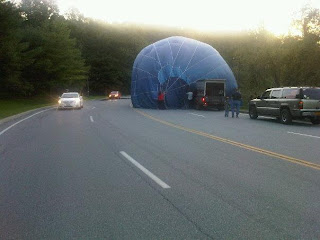 I discovered "American Revolution: pages from a Negro Worker's Notebook" by James Boggs listening to Democracy Now! on KAZI: The Voice of Austin. They interviewed his widow, Grace Lee Boggs: they were a Chinese/Black American interracial couple when it wasn't as prevalent in this country at the time. I was intrigued enough to purchase it. As my usual habit is, when a book has profoundly impacted me, I wrote a review.


What follows is the product description on Amazon and my review. It is not meant to support or debase the #OccupyWallStreet movement. I do think that what we're experiencing as an American culture is the adjustment to the impact of technology, globalization, outsourcing, increased income disparity, and what we need to do going forward...

James Boggs, born in Marion Junction, Alabama in 1919, never dreamed of becoming President or a locomotive engineer. He grew up in a world where the white folks are gentlemen by day and Ku Klux Klanners at night. Marion Junction is in Dallas County where as late as 1963, although African-Americans made up over 57 percent of the total county population of 57,000, only 130 were registered voters. After graduating from Dunbar High School in Bessemer, Alabama, in 1937, Boggs took the first freight train north, bumming his way through the western part of the country, working in the hop fields of the state of Washington, cutting ice in Minnesota, and finally ending up in Detroit where he worked on WPA until the Second World War gave him a chance to enter the Chrysler auto plant. Both a keen analysis of U.S. society and a passionate call for revolutionary struggle, The American Revolution has been translated into French, Italian, Japanese, Spanish, Catalan, and Portuguese.

The original portion of James Boggs book was only 93 pages. The extension was commentary from his widow, Grace Boggs and others his writings influenced and impressed.


Though I don't ascribe to outright socialism (Medicare/the VA/Military Hospitals/Social Security are after all in a Democratic/Capitalist construct), I don't think James Boggs does either. He rightly analyzed Marx's commentary and put it in the era of the industrial age. James Boggs wrote during the turbulent '60s and post WWII and the Korean conflicts. What was interesting is his insight on what he called rightly the loss of jobs due to "automation and cybernation" (his wording for the impact of robotics and computers). Part of what we're encountering now in this downturn is something I've noted in blog posts: a lot of jobs are not going to come back because they've been replaced (automation and computers) or outsourced to other countries.


Indeed, at this time period the transistor was rapidly replacing the vacuum tube and a lot of manual work it did; Sputnik not only revolutionized communication technology, it spurred the space race to the moon and the militarization of space. Before 9/11, missiles had forever obliterated the barrier of the seas from attacks on the homeland.


What it impressed me with: he never mentioned the word "globalization," since such a concept did not exist nor the word in the lexicon. He did hint strongly at "localization," at finding another definition of being human; not by working for a company but manning your own local business; supplying your own vegetables in an urban garden, perhaps (today) outfitting your home with solar cells and wind turbines; declaring yourself an Independent politically and forcing the government complex to listen to the people versus the status-quo corporations that fund them. It was insightful and disturbing at the same time.

Technology Review: Does IT Cost More Jobs than It Creates?
Posted by physics4thecool at 6:00 AM