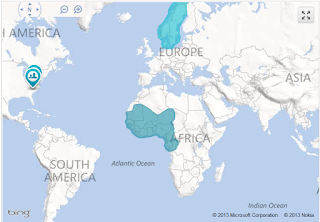 About Your Region
Your ethnicity indicates that you have ancestry from West Africa, an area that stretches along the continent's Atlantic coast from the desolate sands of the Sahara in Mauritania and Mali to the humid canopies of the central African rain forests in Gabon and Congo. Camel caravans once hauled rock salt from desert mines through the legendary city of Timbuktu. And it's the only place on Earth where you can see a lowland gorilla outside of a zoo.

The people of this region trace their ethnic and cultural roots to numerous different sources. The Tuareg Berbers in the predominantly Muslim north are descended from the desert nomads of the Sahara; the sub-Saharan African populations including the Hausa, Mandinka, and Youruba are descendents of the ancient western kingdoms that dominated the region before the arrival of European colonists; the Baka of Cameroon and Gabon, previously referred to as "pygmies," are some of the oldest residents of the area; and the Bantu language group, which originated in Cameroon, is spoken across the entire southern half of the continent.

European colonialism and exploitation, including a centuries-long slave trade, as well as brutal civil wars, despotism, and uncontrolled governmental corruption in the post-colonial era have kept the region mired in poverty. Since the end of Liberia's second civil war in 2003, the region has seen a stretch of relative peace and a decrease in corruption. Hopefully the future will bring prosperity to this region.

Migrations into this region
Western Africa was first occupied by modern humans about 50,000 years ago. More recently, the colonial period saw immigrants from many European countries establish colonies and trading posts throughout Western Africa. However, the genetic impact of these historical Europeans is thought to be very small.

Migrations from this region
The majority of African-Americans ancestry derives from Western Africa. This is mostly because during the Atlantic slave trade of the 18th and 19th centuries, African slaves from the coastal regions of Western Africa were captured and shipped to the Americas. Even groups further inland were sometimes captured and traded out to the coast for slavery.
Posted by physics4thecool at 4:00 AM