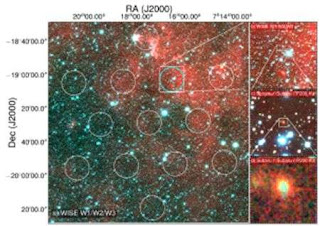 This image shows the field of view of the Parkes radio telescope on the left. On the right are successive zoom-ins in on the area where the signal came from (cyan circular region). The image at the bottom right shows the Subaru image of the FRB galaxy, with the superimposed elliptical regions showing the location of the fading 6-day afterglow seen with ATCA. Image Credit: D. Kaplan (UWM), E. F. Keane (SKAO).


An international team of scientists using a combination of radio and optical telescopes has for the first time managed to identify the location of a fast radio burst, allowing them to confirm the current cosmological model of the distribution of matter in the universe.


On April 18, 2015, a fast radio burst (FRB) was detected by the Commonwealth Scientific and Industrial Research Organisation (CSIRO)'s 64-m Parkes radio telescope in Australia. An international alert was triggered to follow it up with other telescopes and within a few hours, a number of telescopes around the world were looking for the signal, including CSIRO's Australian Telescope Compact Array (ATCA).


FRBs are mysterious bright radio flashes generally lasting only a few milliseconds. Their origin is still unknown, with a long list of potential phenomena associated with them. FRBs are very difficult to detect; before this discovery only 16 had been detected.


"In the past FRBs have been found by sifting through data months or even years later. By that time it is too late to do follow up observations." says Dr Evan Keane, Project Scientist at the Square Kilometre Array Organisation and the lead scientist behind the study. To remedy this, the team developed their own observing system to detect FRBs within seconds, and to immediately alert other telescopes, when there is still time to search for more evidence in the aftermath of the initial flash.