The Mendacity of Dopes...


“Putin’s thesis is that the American constitution is an experiment that will fail if it is challenged in the right way from within,” Mitchell continued. “Putin wants to break apart the American republic not by influencing an election or two, but by systematically inflaming the fault lines within our society. Accepting this fact is absolutely essential for developing a long-term response to the problem.” The problem Mitchell was describing has a kind of heads-I-win-tails-you-lose quality to it as far as Putin is concerned: Not only has the Russian leader tried to exploit political polarization over issues like race and guns, his attempts to do so have themselves become deeply divisive—to the point where even Trump’s advisers frequently find themselves at odds with the man they serve.


Part of Mitchell’s argument—which might be viewed favorably by a president who has taken particular umbrage at the notion that Putin sought to help him defeat Hillary Clinton in the 2016 presidential race—was that the Russian government isn't necessarily interested in supporting a specific politician, party, or ideology. Instead, it simply wants to sow chaos in the United States to advance its own goals, which it sees as threatened by America’s preeminent position in the world. Mitchell cited the revelations on Tuesday that suspected Russian government hackers have been targeting conservative U.S. think tanks and promoting “fringe voices” on both the left and the right on social-media sites like Facebook.


Uri Friedman, The Atlantic: Even Trump’s Own Adviser Is Warning About ‘Politicizing’ the Threat From Russia. But the danger he sees is already here.

Fascism (noun):
often capitalized : a political philosophy, movement, or regime (such as that of the Fascisti) that exalts nation and often race above the individual and that stands for a centralized autocratic government headed by a dictatorial leader, severe economic and social regimentation, and forcible suppression of opposition Merriam-Webster


Racism (noun):
1. a belief or doctrine that inherent differences among the various human racial groups determine cultural or individual achievement, usually involving the idea that one's own race is superior and has the right to dominate others or that a particular racial group is inferior to the others.
2. a policy, system of government, etc., based upon or fostering such a doctrine; discrimination.
3. hatred or intolerance of another race or other races. Dictionary.com


White supremacy (noun):
The belief that white people are superior to those of all other races, especially the black race, and should therefore dominate society. Oxford Dictionaries


The radical and religious right had long ago convinced themselves that Vladimir Putin and Russia were their friends. Whereas I and more sane members of the human species look upon "The Handmaid's Tale" by Margaret Atwood as a fanciful dystopian novel, and highly imaginative rendition on Netflix (I'll reserve my commentary on the end of season 2). Other elements of our human family, more familiar with the fearful, reptilian portion of our evolved brains, look upon it, "1984" by George Orwell and "Brave New World" by Aldous Huxley and Russia's methods...as blueprints.


The election of the first and only African American in the history of the republic, to that point 232 years in 2008, set up revulsion on the "white" right that culminated in racist birtherism, witch doctor bone-in-nose bigotry with respect to the Affordable Care Act; effigies of the 44th president either burned, hung (or, both) and the memorable "pray for the president" bumper stickers from a bizarre verse application of Psalms 109:8 - 10 (shortened to verse 8, but understood in total):


Chapter 2, page 33, subsection titled:
Numerical Population Power
In a democratic society, the numerical majority wins, rules and decides. The theoretical rights of a minority, may or may not be respected, especially if they are a planned minority. Numerical population power is the power that comes to those groups that acquire power through their sheer size. The black population peaked in the 1750s when slaves and free blacks accounted for approximately 33 percent of the total population. The high numerical strength of blacks caused fear and concern among whites. They feared the loss of their own numerical power. Word of black Haitians successful slave revolt in the 1790s had spread across America and reportedly ignited several slave revolts in Southern states.


The First U.S. Congress enacted the first naturalization law that declared American to be a nation for "whites only." The naturalization act and other income incentives attracted a mass influx of legal and illegal European ethnics, followed by Asian and Hispanic immigrants a century later. The immigration quota for blacks remained zero until their total percentage of the population declined to nine percent. By making blacks a planned numerical minority, white society assured its dominance in a democratic society where the majority always wins. Source: Sample chapter


This is the metastasis of "The Southern Strategy" a rancid, racist tactic that was birthed on the heels of the assassinations of Martin Luther King and Robert F. Kennedy. It was and is a desperate bid for power. It predates itself as the definition of "white" changed from excluding everyone except "Nordic stock" Europeans (the English, mostly) to eventually including the previously excluded: Italians, Jews [and ironically] Russians all had tiny quotas. The resurgence of the Ku Klux Klan and the nascent eugenics movement in the United States fueled and influenced immigration policy in the earlier part of the last century. Admittedly, despite its reprehensible aims, it worked remarkably well for quite a while.


A president with decidedly African features, he and his wife both educated at Ivy League schools and a pitch-perfect family did not personify the fictional "Huxtables" before the fall of Mr. Cosby to their many detractors. The continual reminder that the country is becoming browner only ignited more fear and resolve to fight a demographic shift not in their favor of continual predominance circa 2042 - 2045. Their resident at 1600 Pennsylvania Avenue transmitted a well-worn, white supremacist trope regarding farmland in South Africa (it's returning the farmland to their original, African owners), but he needs a distraction since his  former campaign manager and former personal lawyer were both found guilty on a total of 16 felony counts in a matter of minutes. Their visceral reaction to them was an existential crisis, a call to arms; a "white genocide," ironically feared by the descendants of those that caused it well before the "Trail of Tears" for Native Americans. It caused Roger Ailes to see the power of televised propaganda and cater to an audience that were well past facts post the repeal of the Fairness Doctrine and the rise of listening to Rush Limbaugh on AM Talk Radio and his "ditto head" clones; well past reasoned discourse before Twitter came online. What facts can be revealed are rebuffed by an avalanche of lies, there are no "gotchas" for a party that with the help of Karl Rove started "creating their own realities" a long time ago. A sizable chunk of the electorate has been in this "post-truth" Twilight Zone for decades.


All they needed was a useful idiot avatar, and a master spy to push the republic over the precipice. Ironically, if successful, the 2nd Amendment along with all others in a theoretical fall of our republic would become meaningless as in Russia, there is no right to bear arms that "former Americans" would recognize or appreciate. The imagined confiscation by government "jackbooted thugs" may be under the flag of a foreign power that duped the gullible:


“One of the saddest lessons of history is this: If we've been bamboozled long enough, we tend to reject any evidence of the bamboozle. We’re no longer interested in finding out the truth. The bamboozle has captured us. It’s simply too painful to acknowledge, even to ourselves, that we've been taken. Once you give a charlatan power over you, you almost never get it back.”


― Carl Sagan, The Demon-Haunted World: Science as a Candle in the Dark


For the sake of all liberal democracies and humanity on the PLANET, they...MUST...fail. 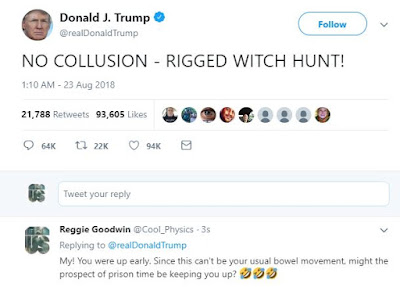