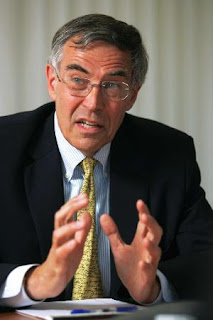 Rep. Rush Holt, an astrophysicist, was managing a Princeton University lab trying to harness the power of nuclear fusion when he won a seat in Congress in 1998. He ousted the incumbent, in part, by attacking the Republican’s decision to sing a mock lullaby — “Twinkle, Twinkle, Kenneth Starr” — on the House floor in praise of the special prosecutor investigating President Bill Clinton.

* On helping the poor:

"The idea that somehow we had to guard so strongly against misuse of food stamps that we will deny hungry children food is not just hardhearted, it's cruel. … We have to get beyond the mentality in Washington that says we're a poor nation. We are not. We are the wealthiest nation in the world. … We have to get beyond the idea that the role of government is to provide ever more privilege for the already fortunate.

"This is an urgent problem. … Climate change has to be dealt with by removing our emphasis on fossil fuels. … We are ruining our planet and killing people by the millions. … How do we do it? We have to keep presenting the facts. Presenting the evidence. And confronting those who would deny the evidence until they would deny it no more.