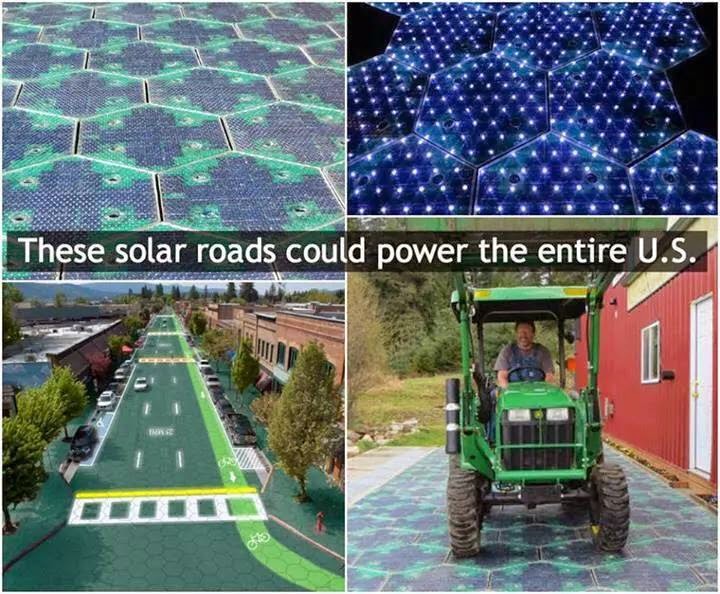 ...IF we're smart enough to actually do it!

If other countries followed our lead, the number one reason for conflict - resources - would be reduced significantly. We'd have to resort to actually solving real-world problems via cooperation, and might just make a buck and a life in the process.

A small US-based company called Solar Roadways are developing a solar road surface that, if installed nationwide, has the potential to produce more renewable energy than the entire country uses. In fact, they’ve actually already developed a working prototype that’s been installed in a parking lot, and they’re now crowdsourcing funds in order to tweak the design and move towards production.

Solar Roadways, which was started by Scott and Julie Brusaw in 2006, designed and developed hexagonal glass solar panels studded with LED lights that could be installed on a variety of surfaces such as roads, pavements and playgrounds. These panels would more than pay for themselves and would benefit both businesses and homeowners as the energy generated from driveways and parking lots could be used to power buildings, and any excess can be sold back to the grid.

The panels also contain heating elements to melt ice and snow so are ideal in winter conditions, and LEDs to make road lines and signs which have been previously shown to reduce night time accidents. The surface could also be used to charge electric vehicles as oppose to fossil fuels, and future technology could even allow for charging whilst driving via mutual induction panels. Amazingly, the team also found that car headlights can produce energy in the panels, so cars driving around at night would be producing some electricity.


Read more at http://www.iflscience.com/technology/solar-roads-could-power-entire-country#feX48VfbL4mvYe5C.99, Justine Alford
Posted by physics4thecool at 4:00 AM