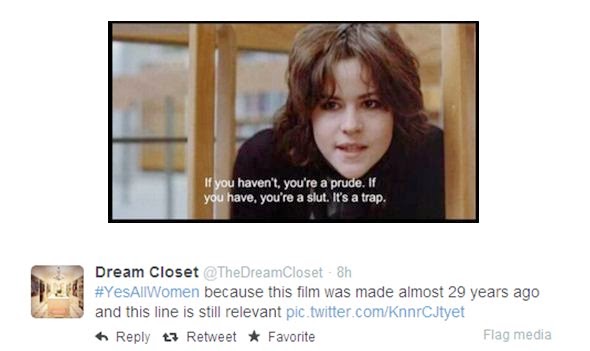 A letter to my sons:

My hope at now a few years beyond half a century, that I've been a good example to you. Above all, I hope you know me as "Pop" and never encounter the man I was before I met your mother. Oh, he could write a military communications-electronics plan, he witnessed the rise of DARPANET to its commercial evolution the Internet; he knew engineering, physics and advanced mathematics; he was as much the Trekkie you enjoyed as we watched "The Next Generation," "Deep Space Nine" and "Voyager." He was also at that time shallow, self-centered and quite useless to the human species. He mistook conquest for intimacy.

That man was eager to be a part of the crowd; ran with the dogs of the porch; became a "player" because - before your mother - I apparently could not let on to the Ferrell military wolf pack at that time I was in an actual "relationship" with any woman; influenced easily by others that were themselves not as cock-sure and confident of their swagger as they had led on. Many of them are now the "old-men-at-the-bar": buying drinks on the fantasy someone still wants to see their wrinkled, sagging-without-pants butt-ugly-naked bodies; or interestingly ministers, I assume to atone for our previous promiscuous sins.

I've been reading the trend on Twitter: #YesAllWomen. It would be far too easy to distance myself from the massacre that occurred in Isla Vista at UC Santa Barbara, or the attacks resulting in greater than 200 girls kidnapped by Boka Haram. They are related, reflected in the same dark mirror as the hash tag that has over a million hits world wide from the continent of Africa, Europe, Pakistan and the Americas.

It was not your video games that created this; it was not hip-hop music; it was not a "lack of family values." Those are merely symptoms of misogyny.

It was us: men and the culture of entitlement we've created for ourselves.

It has been imbibed deeply in the stories we've told ourselves: Eve and the apple; "once upon a time." Always, it is the "Prince Charming" that rides to the rescue and slays the evil dragon, never the woman who saves herself. Always, it is Cyrano and Christian contesting and collaborating for the possession of Roxanne, even if by proxy for Cyrano. The feelings of the female and to whom she would like to couple - Adam, Charming, Cyrano or Christian - is seen as an afterthought, irrelevant, a non-issue. Roxanne would have gladly chosen Cyrano (which, is kind of creepy as they were cousins) had he only "asked" rather than worship her from the shadows and treat her like fragile china, a possession: a THING, a brass ring; a prize to be won. The most pious chronicles, the most fantastic, fantasy-based stories; the most "romantic" narratives of all time objectify women as second-class human beings, and not full, equal participants in society. It even extends to the sciences, sadly (see 1 hr, 1 min, 15 second mark:

I am writing this to you to disabuse yourselves from such notions. Even at the height of my youth, I could easily walk up to a table of young ladies at any bar in Austin, Texas and ask all (say five) to dance - all five could turn me down. My feelings would be hurt, but I'm not so injured that I'm homicidal. Being "shot-down"/rejected is a part of the agreed "game." If successful at this game, I was guilty of the violence of the lie ("love" is a four-letter-word); the cheat (the ambition to fill a black book and impress the aforementioned "pack"); the steal (as in wasting their precious time); the killing of hope (see previously "lie") and the baggage these women inevitably took into their relationships beyond me. These women: daughters, sisters, cousins, mothers, friends, lovers - humans, deserved better.

Your grandfather gave me some advice that I later put in a haiku:

Father's wisdom: a
Man has caught a woman when
She embraces him.

Meaning: if you don't say or do anything too stupid, you probably - with some manners and patience have a good chance at a relationship, which may only be a friendship, and that is quite fine. The choices of sharing her life and/or her body are hers, and not your entitlement. We need more friendships between the sexes, and less of the following:

Women are not "goals": notches on your belt or proof of your masculinity. Women are not property as slaves, goldfish or Labrador retrievers. Numbers do not prove your virility, they would instead prove your shallowness, and increase the possibility of an STD. There are other greater things you could be known for that could help others; solve an intractable problem; advance the human species and show the positivism of your background, culture and inner natures. No simply means no, which as another human being they have a right to say. I speak this life into you at 50+ so you can glean from my own sad mistakes. My quote:


The above comprises US data, the world is similarly worse. It would appear that the path to world peace is not in the bombs we make, but in the way we treat our women.

Because of this misogynistic culture - underpaid professional cheerleaders, exploited hip-hop video vixens, over-sexual game avatars and reality TV show stars, there are some women that will support their own exploitation unawares. It is a form of Stockholm syndrome; insidious mental conditioning through consumer marketing. You can only help to an extent, but my advice would be to wish them well, move on to someone whom you can both love and respect. Rage or the enactment of violence should never be a part of your interactions. The women you encounter are daughters, sisters, cousins, mothers, friends, lovers: humans!

It is the same way you would like to see me (or any man) treat your own mother.

As men, we need to clear this dark mirror, atone and try again, mightily.

Love always, Pop
Posted by physics4thecool at 4:00 AM