I of course have several nerd shirts. One I bought from my company spells out "I play with chips" using elements of the Periodic Table. The list of elements conform with literally substances used in most electronic devices: Iodine (I53), Phosphorous (P15), Lanthanum (La57), Yttrium (Y39), Tungsten (W74), Iodine (I53), Thorium (Th90), Carbon (C6), Hydrogen (H1), Iodine (I53), Phosphorous (P15), Sulfur (S16). I believe it was contracted to at least my company, but a simple logo change on the left sleeve could disseminate it. I don't see it anywhere else on the Internet. 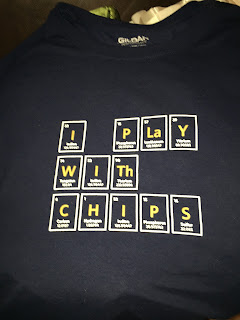 I put the links to the safety data sheets on them above because with usage there is the discarding, the throwing away in trashcans that end up in landfills that like radioactive elements and plastics, have VERY long shelf lives hazardous to human health. I'm sure cornstarch is probably a lot less harsh. The shirt is still a good conversation starter.


As consumers upgrade their gadgets at an increasing pace, the amount of electronic waste we generate continues to mount. To help combat this environmental problem, researchers have modified a degradable bioplastic derived from corn starch or other natural sources for use in more eco-friendly electronic components. They report their development in ACS' journal Industrial & Engineering Chemistry Research.


Abstract
Nano metal–organic frameworks (ZIF-8) particles were synthesized, and poly(lactic acid) (PLA)/ZIF-8 nanocomposite films were prepared by solution-blending and film-casting methods. The addition of nano ZIF-8 particles improved the mechanical properties and had an impact on the crystallization of PLA. The electrical properties of the PLA/ZIF-8 nanocomposites were found to be dependent on the frequency and the ZIF-8 content. The prepared PLA/ZIF-8 films had good transparency even as the content of the nano ZIF-8 particles reached 3 wt %. Compared with 21.5% of pure PLA, the limited oxygen index value of the nanocomposite film containing 1 wt % ZIF-8 reached 26.0%. Therefore, it is proposed that the prepared nanocomposites can be used as the substrates and dielectric to make disposable electronics. The char residues after burning were studied in detail by scanning electron microscopy and Raman and X-ray photoelectron spectroscopies, and the flame retardant mechanism was also discussed.