I participated in the Mid Hudson March for Science Saturday, 22 April 2017 at 2:00 pm Eastern. The weather was overcast but not rainy at a comfortable 57 degrees, so it made a 0.6 mile march quite doable and pleasant.


I was a little concerned and jealous when I saw the marches in DC and NYC, the crowds featured by the news outlets in Times Square and the nation's capital were impressive and large. Poughkeepsie held its own quite impressive display of unity for science, reason and ultimately truth. I estimate we had 350 - 400 science enthusiasts, young and old - from toddlers to retired - and as diverse as a prism or rainbow. There was the sign "proud parents of a PhD in Chemistry"; the beautiful fraternal twins, one of them couldn't relax in his dual stroller out of the grasp of his mother. I had interesting side conversations in things ranging from the origin of the Internet, Moore's Law and the current policies that have everyone concerned. I saw a few irritated drivers as we gummed up traffic down Main Street. We had to stay on the sidewalk to the final destination along the Hudson River.


Every march needs a GREAT BAND with a driving beat to step forward, even for brief trek. Please note the creative signs displayed at the march.

A coed from Marist College remarked: "Last semester, I went to concerts. This semester, my life revolves around marches." I asked her and her friend - an African American and Asian - if they were registered to vote. They enthusiastically said yes, and pledged to vote in EVERY election. That, like science matters.


I felt overwhelmed, first at the brief memory of my deceased parents and their support of my science pursuits. Then something I used to experience when I jogged, similar to "runners high," as we got to the end of the march at the shore of the Hudson River at Wayas Park: there were several "science teach ins" and people that wore t-shirts that said "ask me about _____." I talked to a member of the Mid Hudson Astronomical Association (I'm on their meet up) and we talked shop about when and where they meet. Since my schedule had changed, I said I could meet them on their Wednesday night star gazing. 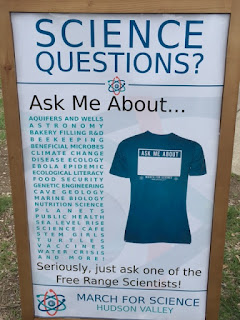 I talked to a man that had a t-shirt that said "ask me about Ebola." I found out he was not a medical doctor as I had surmised, but a historian. He was born in Sierra Leon, and was documenting how colonialism had affected his country in the way of infectious diseases (sounded similar to the book Germs, Guns an Steel by Jared Diamond). We had a pleasant conversation and a good exchange. I shook his hand as I moved to other exhibits.


I saw the STEM teach-in by IBM with the typical wafer samples and motherboards, and chuckled that the electronic snap kits I use to do the same thing they also brought (they had the 100 experiment kit, I have that, the 750 experiment and 3-D kits).


There were conservationists, botanists, possum skeletons and pelts for some reason, people in lab coats and 45 in effigy. I purposely didn't take a photo of it since he's quite ubiquitous and nauseating without my broadcasting.


I guess my high was the concern shown by a diverse community quite concerned with science and its pursuit of truth being warped to the desire of authoritarians that since Galileo have been threatened that the Scientific Method typically doesn't agree with their narrative. I felt my eyes weld; my chest warm as my blood rushed.


Though I went there by myself (my wife exhausted from a real estate exam), I at no time felt "alone."