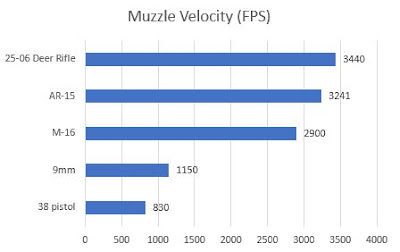 
The wolf also shall dwell with the lamb,
The leopard shall lie down with the young goat,
The calf and the young lion and the fatling together;
And a little child shall lead them. Isaiah 11:6


The Excel graph and table compares the muzzle velocities of different firearms in feet per second (FPS). The physics of bullets and bodies can be tremendously horrible, as Gina Kolata and C. J. Chivers in the New York Times attests. Maureen Downey in the Atlantic Journal Constitution reports trained police officers have an 18% accuracy rate in a gunfight. Arming teachers is not a solution towards an "armed and polite society": it is the recipe for future bloodbaths, supplied by young bodies.


In the Y2K scare days (they seem mild in comparison to current events), my oldest son was shouted "WHITE POWER" at from the front of our lawn in Cedar Park, Texas by the occupants of a passing pickup truck. It was 1999, and everyone was getting "Apocalypse crazy." I promptly went to a pawn shop and purchased a Gloc 9 mm to protect my wife and his younger brother. I've since sold it. I admit it was a reaction to what for most African Americans is a real and historical evidence-induced fear of a crazed lynch mob. It is dissimilar completely to the irrational fears chronicled in Scientific American by Jeremy Adam Smith: "Why Are White Men Stockpiling Guns?" I can pretty much guarantee it wasn't because some Panther Party member shouted "BLACK POWER" from their front lawns.


If I said my sister's name, you wouldn't find it in a history book. She, like these youth was a part of a movement. It was the reason we have the Civil Rights Act, Voting Rights Act (under attack) and the Fair Housing Act. It was the Civil Rights movement in the 1960's. She was and is my hero. It was a time of lambs becoming lions.


It was the youth then that drove the change in laws, first at the Woolworth counter in Greensboro that eventually got rid of the "whites only"; "blacks only" signs ubiquitous at the time. There were nervous days when she was arrested, hosed, beaten...I just become emotional typing it out. The sacrifices were not trivial then, or now.


I also become emotional when children are killed. We failed them as a nation in Sandy Hook. The imbeciles then and now that labeled the parents and now young citizens as "crisis actors" are the vilest of humanity. They are not to be argued with, but pitied.


It appears the youth have found their voice: in organizing this impressive, symbolic walkout; by organizing the March for Our Lives on the 24th of this month. Also by realizing they have another power: voting. They have promised to vote in 2018 when many will first turn 18, 2020 and thereafter.


If there had not been an assault on their peace at a place they once considered safe, they would be sharing ear buds listening to music, gossiping and arguing on social media apps. They would have looked at Civics as antiquated, something their parents concerned themselves with. Nothing about who was president or which party was in power would have mattered. For the children at Parkland, nothing changed their fortunate and quite privileged lives...except the massacre visited on their doorsteps last Valentine's Day. The irony is like the opioid crisis vs. the crack cocaine epidemic, the difference in approach tends to correlate with zip codes. Black Lives Matter was their most recent prototype for the usage of social media to prove a point.


No more. Without specifically mentioning "intersectionality," their online, in-person and grass roots rainbow campaign has remarkably achieved it.


There will be those who tell them unceremoniously to "shut up." There will be threats both frivolous and genuinely deadly. There may be nervous days, hosing, beatings and worse. Don't listen and don't let them kowtow you. You are STRONGER than you know; you are stronger than THEM - and they KNOW it. Reagan won the youth vote 61 - 30 in the 1980's. They can't do that anymore. Jonathan Chait of NY Magazine says you are younger, more diverse, more liberal and know your power. They - the old, ossified fossils - are dying off, and they are TERRIFIED.


Children - then, and now - will lead us. It is always when lambs are slaughtered, lions are eventually stirred, and roar.


Analog signs have been supplemented with websites. Fliers have been updated to Facebook Live and Snap Chat. They are still marching as did their ancestors. That's what lions do.


10:00 am, children walked out en masse on the one month observance of the massacre when people are usually struggling with restaurant invitations, candies given to sweethearts or lamentations of not having one. 17 minutes for 17 lives lost.

A generation raised on gun violence sends a clear message to adults: Enough is enough, Holly Yan and Emanuella Grinberg, CNN
Brittany Packnett: This is how we talk about the black victims of gun violence in America, Anthony Smith, MIC
ALABAMA 2-YEAR-OLD KILLS HIS 1-YEAR-OLD BROTHER IN ACCIDENTAL SHOOTING, Ryan Sit, Newsweek (13 March 18)
Three Accidental School Shootings in One Week — the Latest by a Teacher in a Gun Safety Class, Mark Keierleber, The 74 Million (14 March 18)
Posted by physics4thecool at 2:00 AM