America has self-mythologized as the world's "city on a hill" from Winthrop to Reagan, not fully understanding the dark origins of the quote. For a time, the mythology modulated our behaviors on the world stage. There was an unease with friends and foes as to "what will the US think?" It's devolved to oxymoron: instead of "United States" we appear to be "50 separate states of strong, myopic opinions; cemented by bigotry, homophobia, misogyny. racism, sexism for a dwindling constituency trying to maintain power and relevance in perpetuity." A bit long, but more accurate, less myth and apropos. Evangelicals officially became a numerical minority in 2017, in parallel or a precursor to the reaction when so-called white Americans become minorities circa 2042 (as a demographic, they were first created in 1681). Relevance explains why they jettisoned their previous bulletproof stance on piousness, "family values" and consciously voted for an admitted on tape sexual assaulter. We have citizens wearing t-shirts saying: "I'd rather be Russian than Democrat," after 17 intelligence agencies confirmed an assault on our electoral process, thus our sovereignty in a bizarre, textbook admittance of Stockholm syndrome.


The United States is in a hostage situation over what amounts to a racist totem, itself a mnemonic to remind their daft, Archie Bunker candidate to demonize brown people. The hostage crisis is being bolstered by the two unelected totems of white "supremacy," Ann Coulter and Rush Limbaugh that thankfully have given Mother Nature and humanity the most excellent gift of not procreating. Best estimates are even if he got his pulled-from-his-rear 5.7 billion dollar price tag, eminent domain counter lawsuits would keep this Klan symbol in courts for years. We're subjected to the tweets; random, disjointed thoughts and septuagenarian bowel movements of a madman: the fact I have to say that is frightening. Due to this shutdown, the US is not represented at the World Economic Forum in Davos, Switzerland. The NY FBI is reporting to food banks to feed their families. The TSA is understaffed, and air traffic experts see the possibility of disaster on the horizon if this continues. Food stamps and food safety are equally imperiled. Nero supposedly fiddled as Rome burned. The metaphor to our dilemma exists in equivalence of horror in 140 misspelled and malaprop characters of an executive suffering Internet addiction among other mental disorders that may exacerbate themselves as the legal walls close in. The fires of the old republic had embers that eventually ended with breezes, ash and rubble. Plutonium has a half life of several thousand years, and our Orange Caligula has the nuclear codes. 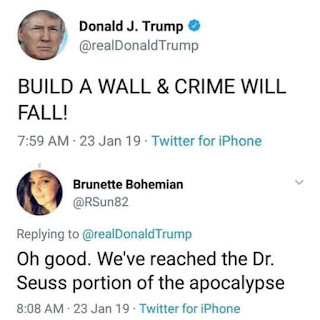 I give the rest of the planet as hope a blogger whose writings I follow that hopefully make some sense of this present darkness, and gives humanity solace that despite our current situation, we may yet dodge this Russian bullet:


I love the look I saw this week.


It was the look of terrified dinosaurs realizing that the meteorite is on its way; the dilated pupils in the eyes of leadened, lumbering prehistoric monsters who've had their run of the house, now finding themselves at the precipice of extinction.


As the most diverse Congress in our history began its session, it was a harbinger of what is coming for this nation, and what it means for their species. America is growing more diverse, and its representative leadership (though still painfully lagging behind) is quickly making up ground. They can see the change in the weather and the light in the sky—and they are scrambling to avoid the coming impact because they can sense it will not end well for them.


It’s why Mitch McConnell is holding the Government hostage over an ineffective, multi-billion dollar monument to racism of a border wall, that two-thirds of this country doesn’t want.


It’s why men like Tucker Carlson, rant mindlessly about successful women ushering in the “decline of men.”


It’s why Jim Mattis and Michael Cohen and General Kelly and Mike Flynn, and a perpetually revolving door of men are leaving or being forced out of positions of influence and leadership.


It’s why Republican leaders have spent the past year creating a massive straw man out of exhausted migrant families and refugee children, as though they were wealthy foreign adversaries rigging a Presidential election.


It’s why Right-wing trolls “leaked” a video of a college-aged Alexandria Ocasio-Cortez dancing, as if it was a clip of her saying she could grab less powerful men by the genitalia.


It’s why Donald Trump spent Christmas Eve bunkered down in the White House behind a smart phone, tweeting scattered, rapid-fire nonsense—instead of being with his family or reading or God forbid, serving someone.


It is the white-hot fear that has overtaken them all.


They’re all in a scalding panic, because they understand that their brief moment in history to have their way and impose their will is quickly coming to a close. The landscape is being renovated, the climate is changing, and as a species they are dying—which is why they will do what all frightened animals do when they are backed into a corner and realize the level of the threat: they will grow more violent than ever before.


In the coming days, the Tweets will become more erratic, the legislative assaults grow more transparently desperate, the hate crimes more brazen, the sermons grow more alarmist and incendiary. These Jurassic, soon-to-be-amber-trapped relics, will act as if the very sky above them is falling, because in very real ways, it is. They will thrash and spit and bellow, in an effort to buy themselves a few more days and a bit more power and another Federal judge or two, but they cannot stave off their inevitable disappearance, as progress and civilization and time swallow them up.


The misogynistic, supremacist nostalgia of their dying glory days is dissolving, in the glorious refining fire of what is coming on the horizon: color and diversity and new and young and wide open. The wall-builders and the close-fisted and the table-monopolizers will not survive this evolution.


America’s history is being rewritten in real-time by a fearless, disparate, interdependent humanity of every creed and orientation and nation of origin, and despite a reign that seemed like it would never end, the once mighty white dinosaurs are running out of real estate—and time.


Their eyes tell the story.

The Extinction of the White American Dinosaur, John Pavlovitz
Posted by physics4thecool at 2:00 AM