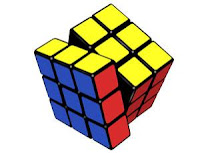 Tom Rokicki, a programmer in Palo Alto, California, along with Morley Davidson, John Dethridge, & Herbert Kociemba determined out of 91,365,146,187,124,313 tries, you can solve the Rubik's Cube in 20 moves. This has become the new God's Number, or God's Algorithm, so-called that supposedly even the Almighty couldn't solve the Rubik's cube in less than 20 moves.

"Forty-two," said Deep Thought, with infinite majesty and calm. "The Answer to the Great Question, of Life, the Universe and Everything." Chapter 27, "Hitchhiker's Guide to the Galaxy." (Deep Thought was the name of the computer)

Posted by physics4thecool at 1:25 PM