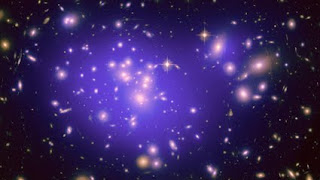 The presence of mass curves space-time. The larger the mass, the larger the curvature. You can detect that curvature by a process called gravitational lensing, that Einstein and Sir Arther Eddington used during an eclipse to confirm his General Relativity. It's generally valid for weak gravitational fields.

"One of the top three priorities for the next decade of astrophysics and astronomy, we noted this week, is unraveling dark energy, the weird force that pushes the universe apart.

"The technique scientists used in this study is called gravitational lensing, and the lens in this case is a huge galactic cluster called Abell 1689.

"Because of its huge mass, the cluster acts as a cosmic magnifying glass, causing light to bend around it. The way in which light is distorted by this cosmic lens depends on three factors: how far away the distant object is; the mass of Abell 1689; and the distribution of dark energy [BBC News]."