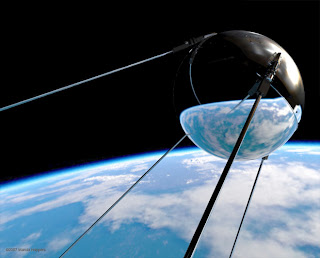 The USA Science & Engineering Festivalis this country's first national science festival and will be held in Washington, D.C. starting October 10, 2010.

This is a good thing!

I went to the web site for the National Society of Hispanic Physicists to get something for Hispanic Heritage Month, and this gem was on their web site.

I talk to a lot of kids, naturally since I teach High School. Many of them of course think I'm weird that I blog about physics or that I actually LIKE math. I get the usual questions that give one pause at their audacity:

"What am I ever going to use this for?"

"I don't need math to be a mechanic or in fashion merchandising."

Actually, you do really.

I usually say they haven't had their "Sputnik moment," when the United States was caught completely off-guard. Americans are uncomfortable with being seen as "second."

We were well into the "Cold War" with the former Soviet Union, so a satellite on October 4, 1957 translated to the Russians ability to deliver thermonuclear warheads to our shores. We caught up January 31, 1958 with our first satellite Explorer I. In July of 1958, NASA was born (I blogged about it) with the National Space Act. Popular Culture followed with series like Star Trek, Lost in Space, The Invaders and The Jetsons.

So often, the fear of war was the motivation for progress and creativity.

I blog this on 10 September 2010, a day before the 9th year anniversary of the 9/11 attacks. That was almost a moment, when out of fear we were willing to trade civil liberties for security. A day before a Florida Pastor may or may not put veterans at risk overseas with a controversial burning of the Koran.

The fourth estate - the news media - is forced to print immediately without much review and then print retractions sheepishly where they cannot be found. The Internet has made print media almost obsolete in that whatever newspaper or magazine you can purchase you can see online for free. Without an estate responsible for sifting through falsities and truths, without fact checking, we're in a cyberspace free-for-all, informing like minds with sometimes monolithic monologues and being in full agreement. Our concept of an informed citizenry in a democracy is threatened.

We are surrounded by information and starving for wisdom: we're entertained by performance and not enthralled by the results of investigation using the Scientific Method. As far as STEM, science, math and engineering are in the words of my students "boring," but the technology that allows them to text, tweet, Facebook and blog they're all over, with no appreciation for the other facets that brought the possibilities of their casual amusement into existence.

In the US, we've created a culture of entertainment, probably at the moment a television program or DVD became the defacto "baby sitter," and when we say to our kids "I can't stand reading/writing/math" and wonder why they're not doing so well in the same subjects at school. In education, it's called "modeling," and not the kind you'd see on the fashion runway.

For my students, this is your "Sputnik moment": the world you will inherit will be far more complicated than the one I grew up in. You have the ever present fear of war around the globe, global warming, natural disasters, technological preeminence or inferiority, economic harmony or disparity; political efficiency or fecklessness. How well you lead and manage it will depend on how well you prepared for it.
Posted by physics4thecool at 3:44 PM