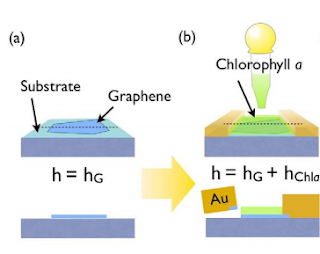 TECHNOLOGY REVIEW: Chlorophyll is one of the most efficient light-absorbing materials known to science. It also happens to be remarkably stable and abundant beyond imagination.

Researchers studying ways to capture and exploit photons view the amazing capabilities of chlorophyll with green-eyed wonder. Indeed, they would dearly love to copy this extraordinary light-gathering ability.

But there may be a quick way of catching up. Instead of designing and making artificial materials that attempt to copy chlorophyll, researchers have begun to think about using this naturally-occurring material itself and attempting to bend it to their will.

Today, Shao-Yu Chen at the Institute of Atomic and Molecular Sciences in Taiwan and a few buddies reveal how they have incorporated chlorophyll into graphene transistors to make light-activated switches.