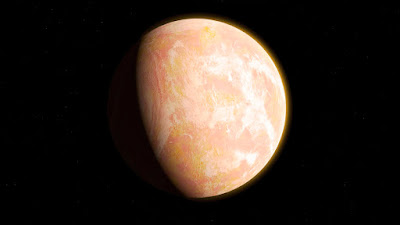 When haze built up in the atmosphere of Archean Earth, the young planet might have looked like this artist's interpretation - a pale orange dot. A team led by Goddard scientists thinks the haze was self-limiting, cooling the surface by about 36 degrees Fahrenheit (20 Kelvins) – not enough to cause runaway glaciation. The team’s modeling suggests that atmospheric haze might be helpful for identifying earthlike exoplanets that could be habitable.
Credits: NASA’s Goddard Space Flight Center/Francis Reddy


For astronomers trying to understand which distant planets might have habitable conditions, the role of atmospheric haze has been hazy. To help sort it out, a team of researchers has been looking to Earth – specifically Earth during the Archean era, an epic 1-1/2-billion-year period early in our planet’s history.

Earth’s atmosphere seems to have been quite different then, probably with little available oxygen but high levels of methane, ammonia and other organic chemicals. Geological evidence suggests that haze might have come and gone sporadically from the Archean atmosphere – and researchers aren’t quite sure why. The team reasoned that a better understanding of haze formation during the Archean era might help inform studies of hazy earthlike exoplanets.


“We like to say that Archean Earth is the most alien planet we have geochemical data for,” said Giada Arney of NASA’s Goddard Spaceflight Center in Greenbelt, Maryland, and a member of the NASA Astrobiology Institute’s Virtual Planetary Laboratory based at the University of Washington, Seattle. Arney is the lead author of two related papers published by the team.


In the best case, haze in a planet’s atmosphere could serve up a smorgasbord of carbon-rich, or organic, molecules that could be transformed by chemical reactions into precursor molecules for life. Haze also might screen out much of the harmful UV radiation that can break down DNA.


In the worst case, haze could become so thick that very little light gets through. In this situation, the surface might get so cold it freezes completely. If a very thick haze occurred on Archean Earth, it might have had a profound effect, because when the era began roughly four billion years ago, the sun was fainter, emitting perhaps 80 percent of the light that it does now.

NASA Team Looks to Ancient Earth First to Study Hazy Exoplanets
Posted by physics4thecool at 2:00 AM