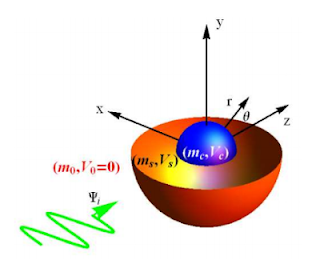 TECHNOLOGY REVIEW: The idea is simple in essence. Ordinary invisibility cloaks work by steering light around a region of space to make it look as if it weren’t there. The mathematical approach that describes this is called transformation optics. It starts with Maxwell’s equation which govern the behaviour of light as it passes through space.

One way to think of light is as a field in space. In transformation optics, this field can be stretched and squeezed like a rubber sheet when it passes through certain types of material. The goal is to engineer this material so that it stretches the sheet around regions of space and so make them invisible.

The approach developed by Jeng Yi and Ray-Kuang is mathematically identical to this. But instead of starting with Maxwell’s equations, they start with the Schrodinger equation which governs the probability of an object being present in a region of space.

Their idea is to treat this probability field like a rubber sheet that can be stretched and squeezed. So the goal in designing a quantum invisibility cloak is to stretch this sheet around a region of space so that the probability of existing inside it is zero. In effect, they’re designing a cloak that shields its contents from reality.

Physics arXiv:
Hide The Interior Region of Core-Shell Nanoparticles With Quantum Invisible Cloaks
Posted by physics4thecool at 4:00 AM