Watson In Your Pocket... 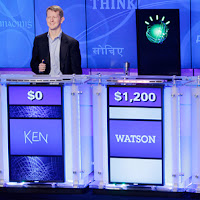 Watson, the IBM computer system that attracted millions of viewers when it defeated two Jeopardy champions handily in 2011, is finally going to meet its public.

Last week, IBM announced that a version of the artificially intelligent software that gave Watson its smarts is to be rented out to companies as a customer service agent. It will be able to respond to questions posed by people, and sustain a basic conversation by keeping track of context and history if a person asks further questions. An “Ask Watson” button on websites or mobile apps will open a text-based dialogue with the retired Jeopardy champion on topics such as product buying decisions and troubleshooting guidance.

This new version of Watson, somewhat opaquely called “Watson Engagement Advisor,” will be the Jeopardy champ’s first truly public test. Over the past two years, IBM has engaged in several trials of Watson intended to test its worth in the workplace—for example, as an aide to medical staff or financial workers (see “Watson Goes to Work in the Hospital”)—but it has not released a general product based on the technology. Even so, several companies have committed to rolling out Watson-based conversation assistants, including the Australian bank ANZ, Royal Bank of Canada, Nielsen, and the publishing and research company IHS.

Read more: IBM's Watson Headed to Your Smartphone as Customer Service Agent
From MIT Technology Review
Follow us: @techreview on Twitter | technologyreview on Facebook
Posted by physics4thecool at 4:00 AM