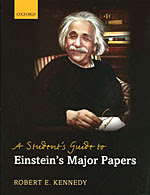 Physics professors often refer to Albert Einstein’s work when teaching relativity, quantum mechanics, or statistical mechanics. I have never given his original papers to my students to supplement their learning, but that will change. I appreciate the importance of having undergraduates read classic and original physics literature, and I have tried to inspire my experimental physics students by assigning Albert Michelson’s 1880 description of his measurement of the speed of light or Robert Millikan’s 1911 oil-drop paper. I have egged the students on to try and do better than Michelson or Millikan using modern technology.

Some of Einstein’s classic papers could also motivate undergraduates, if the physics were fully explained. For instructors who choose to expose their students to Einstein’s scientific articles, Robert E. Kennedy’s A Student’s Guide to Einstein’s Major Papers will be a welcome supplement. Kennedy focuses on Einstein’s four classic papers published in the annus mirabilis of 1905, his doctoral thesis (published in 1906), and his 1916 general relativity paper. 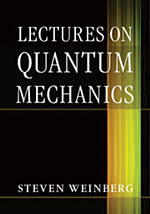 Steven Weinberg, a Nobel laureate for his contributions to the standard model of elementary particles, has a well-deserved reputation as a writer who draws on great depths of physical insight to produce exceptionally clear prose. Until now, his books have been intended either for a general or advanced audience. For general readers, his books include The First Three Minutes: A Modern View of the Origin of the Universe (Basic Books, 1977) and Lake Views: This World and the Universe (Harvard University Press, 2010). For advanced readers, he has written Gravitation and Cosmology (Wiley, 1972), the three-volume Quantum Theory of Fields (Cambridge University Press, 2000), and Cosmology (Oxford University Press, 2008).

Weinberg now turns his attention to a core subject in physics with Lectures on Quantum Mechanics, a text based on a year-long course he has taught to first-year graduate students. The book begins with a 27-page “Historical Introduction” that concisely and elegantly summarizes the development of quantum physics, including an explication of Werner Heisenberg’s matrix mechanics and its equivalence to Erwin Schrödinger’s wave mechanics. We also find some little-known historical tidbits, such as who coined the word “photon.”

Celebrities, sports stars...bah. I have an autographed copy of "The First Three Minutes" (hardcover) and met Professor Weinberg. Nope...not parting with it. You won't find it on E-bay. Willing it to my heirs...

Posted by physics4thecool at 4:33 AM