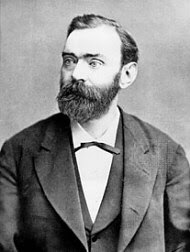 Alfred Bernhard Nobel (21 October 1833 – 10 December 1896) was a Swedish chemist, engineer, innovator, and armaments manufacturer. He was the inventor of dynamite. Nobel also owned Bofors, which he had redirected from its previous role as primarily an iron and steel producer to a major manufacturer of cannon and other armaments. Nobel held 350 different patents, dynamite being the most famous. He used his fortune to posthumously institute the Nobel Prizes. The synthetic element nobelium was named after him. His name also survives in modern-day companies such as Dynamit Nobel and Akzo Nobel, which are descendants of the companies Nobel himself established...In 1888 Alfred's brother Ludvig died while visiting Cannes and a French newspaper erroneously published Alfred's obituary.[1] It condemned him for his invention of dynamite and is said to have brought about his decision to leave a better legacy after his death.[1][8] The obituary stated, Le marchand de la mort est mort ("The merchant of death is dead")[1] and went on to say, "Dr. Alfred Nobel, who became rich by finding ways to kill more people faster than ever before, died yesterday."[9] Alfred was disappointed with what he read and concerned with how he would be remembered.

On 27 November 1895, at the Swedish-Norwegian Club in Paris, Nobel signed his last will and testament and set aside the bulk of his estate to establish the Nobel Prizes, to be awarded annually without distinction of nationality. Wikipedia

The actual web site for the Nobel Prize appears to be down at the moment...

As I walked into the fab I work at, I heard the sound of firecrackers in the distance. Granted, they predate Alfred by several centuries, but the loud banging, the revelry will ensue again tomorrow as I come into work. There is a relation to Nobel, this posting and the 4th.

No one is going to use dynamite thankfully (unless earnestly competing for the Darwin Awards), but in 2011 an estimated 9,600 people were injured by firecrackers according to the Consumer Products Safety Division; some far worse than just injury.

Worry not only how you will be remembered, but how you will proceed through life until its end. Personally, I want to check out with the same digits and body parts I checked in with (a little worse for the wear, understandably).
Posted by physics4thecool at 4:00 AM