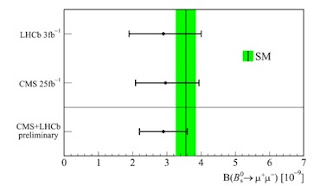 This morning at the EPS conference in Stockholm physicists from CERN, the European particle physics lab, announced the observation of one of the rarest processes in fundamental physics, concluding a search that has lasted almost 30 years. This observation was only possible by combining the results of two CERN experiments, CMS and LHCb.

The result is a stunning success for the Standard Model of particle physics and yet another blow for those hoping for signs of new physics from CERN’s Large Hadron Collider (LHC).

The LHCb and CMS experiments at the LHC have made the first definitive observation of a particle called a Bs meson decaying into two muons, confirming a tentative observation made by LHCb last autumn. The discovery has far-reaching implications for the search for new particles and forces of nature.

Beyond the Standard Model

There are many reasons to believe that the current Standard Model of particle physics is an incomplete description of nature at the fundamental level. Despite its excellent agreement with almost every experimental measurement to date, it has several gaping holes. It fails to describe the force of gravity and has no explanation for the enigmatic dark matter and dark energy that are thought to make up 95% of the Universe. The theory also requires a large amount of “fine-tuning” to match experimental observations, leaving it looking suspiciously like the laws of physics have been orchestrated in a very unnatural way to produce the Universe we live in.

In the last few decades a number of theories have been proposed that solve some of the Standard Model’s problems. One particularly popular idea is supersymmetry (SUSY for short), with posits the existence of a slew of new fundamental particles, each one a mirror image of the particles of the Standard Model. SUSY has many attractive features: it provides a neat explanation for dark matter and unifies the strengths of the three forces of the Standard Model. However, the main reason that physicists were first attracted to it is that it is aesthetically pleasing or “natural” – in other words it doesn’t require the same awkward fine-tuning as the Standard Model.

Physics Highlights: Discovery of Ultra-Rare Decay at LHC
Posted by physics4thecool at 4:00 AM