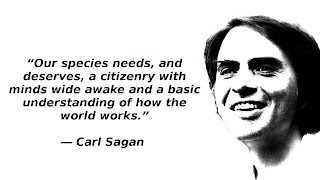 "I have a foreboding of an America in my children's or grandchildren's time -- when the United States is a service and information economy; when nearly all the manufacturing industries have slipped away to other countries; when awesome technological powers are in the hands of a very few, and no one representing the public interest can even grasp the issues; when the people have lost the ability to set their own agendas or knowledgeably question those in authority; when, clutching our crystals and nervously consulting our horoscopes, our critical faculties in decline, unable to distinguish between what feels good and what's true, we slide, almost without noticing, back into superstition and darkness...

"The dumbing down of Americans is most evident in the slow decay of substantive content in the enormously influential media, the 30 second sound bites (now down to 10 seconds or less), lowest common denominator programming, credulous presentations on pseudoscience and superstition, but especially a kind of celebration of ignorance."

Carl Sagan, "The Demon-Haunted World: Science as a Candle in the Dark."

This is a significant date: first of all, it's Hispanic Heritage Month; 5 years ago along with the global financial meltdown, my mother celebrated what would be her last birthday this side of the grave. She lasted until the Thursday before Mother's Day in 2009. She would have been 88 today.

This is one of my favorite quotes by Carl. A shame "The Sagan Effect" is part of the lexicon. We could use some more popularizing of science (kudos to Science Channel), our consumption of which is only as end-users of high tech devices. Neil deGrasse Tyson's revival of "Cosmos" can't come soon enough.

It is quite evident by the turn of recent events, candidates for and in office; ridiculous public statements, inane sound bites parroted; conspiracy theories ad nauseum - cabals, crystals, dogs and cats living together (Ghostbusters - couldn't resist), Bermuda Triangle, Bigfoot, faking six moon landings (and one near-fatal attempt), pyramids by aliens, poltergeists, UFOs and our propensity to concern ourselves with the goings on of "reality shows" - this quote is more haunting than his contribution to modeling and warning the aftermath of thermonuclear war: a nuclear winter. The real cabal conspiracy is NOT wanting to teach critical thinking skills (they now "admit" a wording gaffe/faux pas); "teaching the controversy"; of the dumbing down of Americans in prime time.

A technocracy is so far only hypothetical and the basis of the fictional Superman's alien society (and, it apparently didn't work out well for them). I don't expect an overnight appreciation for science from any of our leaders, but such would help in the long run. It would help Congress's approval rating if they could regulate Wall Street instead the Citizen's United vice-versa. At least have a discussion about how technology is rapidly diminishing the need for certain career fields that can only exacerbate the income gap. Instead, for 126 days of "labor," we get meaningless votes on the taxpayer's time and dollar as we sleepwalk the "American Dream."

We slouch nonchalantly towards dystopia - somewhere between Margaret Atwood's The Handmaid's Tale and Octavia Butler's Parable series. We ignore evidence we think inconvenient to our beliefs; create controversies in science classes that do not exist to satisfy a constituency that thinks dinosaur bones were placed in digs by beelzebub. The crazy thing is people run on this claptrap...and get elected. Then, they wish to be president and have the nuclear codes to Armageddon. The bellicose bravado expressed by certain pundits on the Syrian conflict is prime example of rushing in where angels fear to tread. With noted exception of the Iran-Contra affair star shredder and smuggler, no pundit has any military experience. There are implications for the region and the globe beyond chemical weapons. Biological life is not like "The SIMS": there is no reset button.

What is frightening is that this dumbing down process may actually be a prelude to global conflagration: idiocy before oblivion. I don't begrudge anyone's beliefs and don't impose mine, but the "New Heaven and a New Earth" hopefully has a solution to a warming climate, and post nukes - mechanism to dissipate radiative half-life followed by surviving environmental chill, or full life, liberty and the pursuit of happiness on this pale blue dot...will not be possible.
Scientific American: More Cuts Loom for US Science
Posted by physics4thecool at 4:00 AM