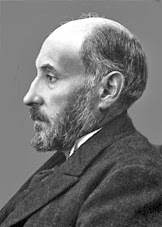 The Nobel Prize in Physiology or Medicine 1906
Camillo Golgi, Santiago Ramón y Cajal
Santiago Ramón y Cajal
Born: 1 May 1852, Petilla de Aragó, Spain
Died: 17 October 1934, Madrid, Spain
Affiliation at the time of the award: Madrid University, Madrid, Spain
Prize motivation: "in recognition of their work on the structure of the nervous system"
Santiago Ramón y Cajal was born on May 1, 1852, at Petilla de Aragón, Spain. As a boy he was apprenticed first to a barber and then to a cobbler. He himself wished to be an artist - his gift for draughtsmanship is evident in his published works. His father, however, who was Professor of Applied Anatomy in the University of Saragossa, persuaded him to study medicine, which he did, chiefly under the direction of his father. (Later, he made drawings for an atlas of anatomy which his father was preparing, but which was never published.)
In 1873 he took his Licentiate in Medicine at Saragossa and served, after a competitive examination, as an army doctor. He took part in an expedition to Cuba in 1874-75, where he contracted malaria and tuberculosis. On his return he became an assistant in the School of Anatomy in the Faculty of Medicine at Saragossa (1875) and then, at his own request, Director of the Saragossa Museum (1879). In 1877 he obtained the degree of Doctor of Medicine at Madrid and in 1883 he was appointed Professor of Descriptive and General Anatomy at Valencia. In 1887 he was appointed Professor of Histology and Pathological Anatomy at Barcelona and in 1892 he was appointed to the same Chair at Madrid. In 1900-1901 he was appointed Director of the «Instituto Nacional de Higiene» and of the «Investigaciones Biológicas».
In 1880 he began to publish scientific works, of which the following are the most important: Manual de Histología normal y Técnica micrográfica (Manual of normal histology and micrographic technique), 1889 (2nd ed., 1893). A summary of this manual recast with additions, appeared under the title Elementos de Histología, etc. (Elements of histology, etc.), 1897; Manual de Anatomía patológica general (Manual of general pathological anatomy), 1890 (3rd ed., 1900). In addition may be cited: Les nouvelles idées sur la fine anatomie des centres nerveux (New ideas on the fine anatomy of the nerve centres), 1894; Textura del sistema nervioso del hombre y de los vertebrados (Textbook on the nervous system of man and the vertebrates), 1897-1899; Die Retina der Wirbelthiere (The retina of vertebrates), 1894.
Apart from these works Cajal has published more than 100 articles in French and Spanish scientific periodicals, especially on the fine structure of the nervous system and especially of the brain and spinal cord, but including also that of muscles and other tissues, and various subjects in the field of general pathology. These articles are dispersed in numerous Spanish journals and various specialized journals of other countries (especially French ones).
Nobel Prize:

Biographical, Nobel Lecture, Photo Gallery
Posted by physics4thecool at 4:30 AM