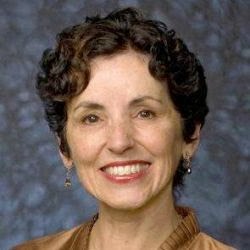 France Anne-Dominic Córdova (born August 5, 1947) is an American astrophysicist, researcher and university administrator. She was the eleventh President of Purdue University,[1] stepping down on July 15, 2012, at the end of her 5-year term. She presently serves as the chair of the Board of Regents of the Smithsonian Institution. On July 31, 2013, President Obama announced his intent to nominate Córdova to be the Director of the National Science Foundation.[2]
Córdova was born in Paris, France, the oldest of twelve children born to a Mexican father and Irish American mother.[3] She attended high school at Bishop Amat High School in La Puente, California, east of Los Angeles and went on to Stanford University, where she graduated cum laude with a bachelor's degree in English and conducted anthropological field work in a Zapotec Indian pueblo in Oaxaca, Mexico. She earned a PhD in Physics from the California Institute of Technology in 1979.
Córdova worked at the Space Astronomy and Astrophysics Group at the Los Alamos National Laboratory from 1979 to 1989, where she also served as Deputy Group Leader, and headed the Department of Astronomy and Astrophysics at Pennsylvania State University from 1989 to 1993. From 1993 to 1996, she became the youngest person and first woman to hold the position of NASA Chief Scientist, serving as the primary scientific advisor to the NASA administrator and the principal interface between NASA headquarters and the broader scientific community.
Córdova then went to the University of California, Santa Barbara where she was Vice-Chancellor for Research and a professor of Physics. In 2002 she was appointed Chancellor of the University of California, Riverside, where she was also a Distinguished Professor of Physics and Astronomy. Córdova led the initial steps toward establishing the UC Riverside School of Medicine.[4] Córdova became the eleventh president of Purdue University in 2007 and promoted student success and the commercialization of interdisciplinary research.[5] Her administration oversaw the establishment of Purdue's College of Health and Human Sciences and its Global Policy Research Institute.[6][7] At the end of her term, Purdue's trustees credited her with leading the school to record levels of research funding, reputational rankings, and student retention rates.[8]
Córdova's scientific career contributions have been in the areas of observational and experimental astrophysics, multi-spectral research on x-ray and gamma ray sources, and space-borne instrumentation. She has published more than 150 scientific papers, and has a current experiment on the European Space Agency's X-Ray Multi-Mirror Mission. In September 2007, she was appointed to the board of directors of BioCrossroads, Indiana's initiative to grow the life sciences through a public-private collaboration that supports the region's research and corporate strengths while encouraging new business development.
Wikipedia: France Anne-Dominic Córdova, PhD
Posted by physics4thecool at 4:30 AM