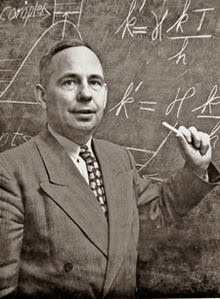 Henry Eyring (February 20, 1901 – December 26, 1981) was a Mexican-born American theoretical chemist whose primary contribution was in the study of chemical reaction rates and intermediates.
A prolific writer, he authored more than 600 scientific articles, ten scientific books, and a few books on the subject of science and religion. He received the Wolf Prize in Chemistry in 1980 and the National Medal of Science in 1966 for developing the Absolute Rate Theory or Transition state theory of chemical reactions, one of the most important developments of 20th-century chemistry. Several other chemists later received the Nobel prize for work based on it, and his failure to receive the Nobel prize was a matter of surprise to many.[1] The Royal Swedish Academy of Sciences apparently did not understand Eyring's theory until it was too late to award him the Nobel; the academy awarded him the Berzelius Medal in 1977 as partial compensation.[2] Sterling M. McMurrin believed he should have received the Nobel Prize but was not awarded it because of his religion.[3]
He was also elected president of the American Chemical Society in 1963 and the Association for the Advancement of Science in 1965.
Wikipedia: Henry Eyring
Posted by physics4thecool at 4:30 AM