With the government stupidly furloughing itself, we could all use some levity... 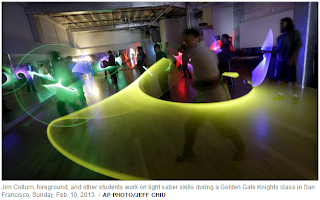 The moment "Star Wars" fans have been waiting for might finally be here: Lightsabers are no longer just a figment of George Lucas' imagination. They could soon be more than a plastic Hollywood prop or a Halloween accessory.
In the Sept. 25 edition of the journal Nature, a team of Harvard University and Massachusetts Institute of Technology (MIT) physicists explain that they've discovered a molecule that behaves exactly like the weapon made famous by Luke Skywalker.
They haven't actually created a real-life lightsaber, but understanding the physics is the first step to that ever happening. (1)
The letter in Nature is titled: "Attractive photons in a quantum nonlinear medium." The abstract reads:
The fundamental properties of light derive from its constituent particles—massless quanta (photons) that do not interact with one another1. However, it has long been known that the realization of coherent interactions between individual photons, akin to those associated with conventional massive particles, could enable a wide variety of novel scientific and engineering applications2, 3. Here we demonstrate a quantum nonlinear medium inside which individual photons travel as massive particles with strong mutual attraction, such that the propagation of photon pairs is dominated by a two-photon bound state4, 5, 6, 7. We achieve this through dispersive coupling of light to strongly interacting atoms in highly excited Rydberg states. We measure the dynamical evolution of the two-photon wavefunction using time-resolved quantum state tomography, and demonstrate a conditional phase shift8 exceeding one radian, resulting in polarization-entangled photon pairs. Particular applications of this technique include all-optical switching, deterministic photonic quantum logic and the generation of strongly correlated states of light9. (2)
The rest of the article goes on to say they weren't LOOKING to build a real-life light saber, only that the physics is there. What was once purely imagined (with a few morons almost qualifying for the Darwin Awards) may soon be possible...maybe.
Still don't want to study physics/quantum mechanics?

1. CBS: Physicists one step closer to creating real-life Lightsabers
2. Nature: Attractive photons in a quantum nonlinear medium
Posted by physics4thecool at 4:00 AM