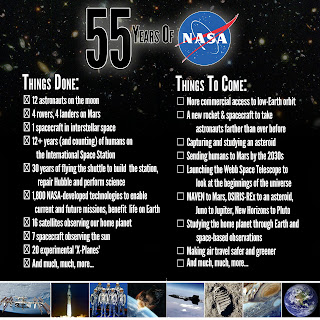 It was the response to Sputnik, the space race to the moon that so many that weren't alive then now deny happened, and its significance to the technological world it helped birth. That response was an investment in science education by President Dwight D. Eisenhower, and it inspired a generation of scientists and engineers that well...produced people like me.

It was spin offs from government research, like...the DARPA project that brought us the Internet, the transistor specifically for the space program; the personal computer; calculators; remote control, cell phones; flat screens; Velcro! Those that hate government are the same that hate socialism, yet shout with shrill sincerity "don't touch my medicare/medicaid"! This so similar to the same inane illogical rants against tenets of science and Entropy; online tirades against science USING tools created by science to do it. If anyone reading this is using social media in these jeremiads, you are guilty of breathtaking hypocrisy.

Though Hispanic Heritage Month, I have delayed the post of the distinguished scientist and educator until tomorrow. I did not want to associate her with the unthinkable. The unthinkable happened last night for the 2nd time in 17 years. The unthinkable is now extortion tactic; government by bully; uncertainty no longer Heisenberg's principle; it is like the conclusion of a terrific series: "breaking bad." Instead of Thomas Paine's "Common Sense," we edify the "Anarchist's Cookbook." The anarchists are about to affect real people, that you and I know. One is my college classmate: an electrical engineer for the US Navy in California.

There is a sickness in this nation; a disease of ignorance that is promoted and openly celebrated. Our "reality stars" need no training in acting or performance; our musicians no training in how to read or write music; our politicians no intellectual rigor in philosophy nor training in the importance of science and technology. The more ignorant you are of history, science, reality, the more you are in this American dispensation celebrated.

Happy birthday, NASA. You are now furloughed with Curiosity and 800,000 government workers.

October 1 is our nation's space agency's 55th birthday. To celebrate, NASA employees can, well, do whatever they want, just as long as they don't do their jobs.


NASA, as President Obama put it in his afternoon remarks, will "shut down almost entirely" if a faction of congressional Republicans succeeds in preventing a clean continuing resolution to keep the government open from coming to the House floor for a vote.


According to The Washington Post, just 549 of NASA's 18,250 employees will be expected to work if the government shuts down. The remainder -- 17,701 people -- will be furloughed.

Even Curiosity, our rover on Mars, will face its own little robot furlough: The explorer will "be put in a protective mode" for the duration of the shutdown, and will not collect any new data during that time.

The Atlantic: Dear NASA, Happy Birthday! To Celebrate, We're Shutting You Down. Love, Congress
Posted by physics4thecool at 4:00 AM