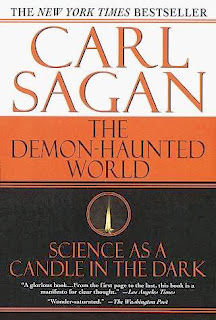 I am admittedly, a Carl Sagan fan. As such, this book is not unfamiliar to me. As such, rereading it in trying times (what I will constantly refer to as the) self-immolation also known as government shutdown, his words are as poignant, as prescient as they were in the mid nineties when it was first published.
I completely avoided my "sermon soliloquy" Sunday, or tried to - see "self-immolation" above. Some paragraphs, sentences on my Kindle (unintentional Freudian slip) gave me pause. I share them without comment or edit, save underlined highlight:
For me, there are four main reasons for a concerted effort to convey science - in radio, TV, movies, newspapers, books, computer programs, theme parks, and classrooms - to every citizen. In all uses of science, it is insufficient - indeed it is dangerous - to produce only a small, highly competent, well-rewarded priesthood of professionals. Instead, some fundamental understanding of the findings and methods of science must be made available on the broadest scale.
Related embed: