The Path to Freedom... 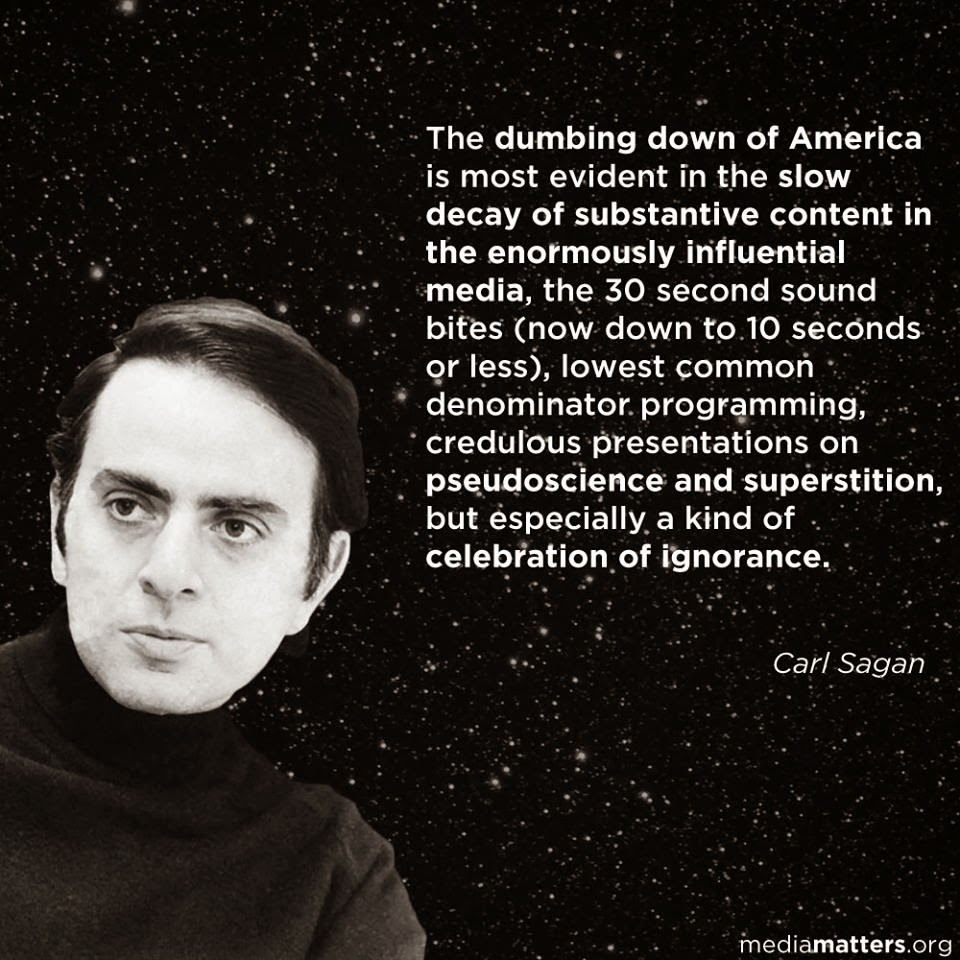 * Dedicated to Wilbur and Sandra Banks (both deceased). Wilbur was my cousin by blood; Sandra by marriage. Like Richard and Mildred Loving, a union between the so-called "races" was provocative in 60's North Carolina during the height of the Civil Rights struggle. They made their loving home in Brooklyn, New York in an environment a bit more enlightened than Winston-Salem at the time. I recall noticing as a small child when they visited the south, it was mostly - surreptitiously - under cover of night.


“One thing I have learned in a long life: that all our science, measured against reality, is primitive and childlike - and yet it is the most precious thing we have.” Albert Einstein (source of the title to Chapter 2 of Sagan's referenced book below)

We are all - every single human that has ever walked the face of the Earth - from what is now known as the African continent, the soil for the root of humanity's Baobab tree starting 6 or 7 million years ago, thankfully well past the Cretaceous Period. About 200,000 years ago, the wanderlust inherit in us all led us to explore and leave Eden. The angle of incidence for ultraviolet radiation, environment adaption and physical separation for millennium did the rest. We are likely as a space faring species to encounter this Punnett Square diversity on distant worlds - if we survive long enough to reach them, and should not [then, or now] find it at all remarkable.

We as a species have unfortunately exacerbated this separation with faux social constructs, magical thinking - conferring/denying powers to melanin or lack thereof; draconian drug polices, gated neighborhoods, consolidated power, for-profit prisons, "old-boy" hierarchies (dubiously based on debunked Social Darwinism [1]) and income inequality enabled by laws once penned by feudal lords, now de facto pseudoscience reinforced by de jure lobbyists. An appreciation for real scientific knowledge could change that, and set us forward out of the darkness of ignorance on a path towards true freedom.

I have endeavored to celebrate science and African American culture and its impact on astronautics, astrophysics, electronics; gas masks and stop lights, part of the set of myriad cultures of humanity in the 21st century. We should all embrace one anothers diversity when the time and situation warrants and when that embrace and acknowledgement neither disrespects or debases. We are globally all "the melting pot"; we are E Pluribus Unum; we are all cousins*.

In doing so, we might have had just one less 9-11 in the US or 7-7 in the UK (zero for both would have been good); one less mass shooting: mall, school, army/naval base, Sikh temple or otherwise; one less Hadiya Pendleton; one less Amadou Diallo; one less Sean Bell; one less Jordan Davis; one less Oscar Grant; one less Jonathan Ferrell; one less police Officer Willie Wilkins; one less police Sgt. Cornel Young Jr.; one less Trayvon Martin...as a result of our scientific enlightenment. One can only hope...

If it seems strange that I end this month with Carl Sagan - here's the tie-in:

COSMOS begins next month (Sunday, March 9th on Fox; March 10th National Geographic), hosted by Neil deGrasse Tyson, PhD and Director of the Hayden Planetarium here in New York. At 17, he received a note from Dr. Sagan which went something like this (my Tyson paraphrase): "I hear you're interested in the universe. So am I." Sagan invited a young Mr. Tyson up to Cornell for a tour, which in many ways shows Sagan as someone that allowed science - not the norm or prejudices in his environment and times - to shape him. Scientists at one time were just as guilty of prejudice as society (a small number sadly still are), but Carl only saw a then young Neil and his desire to explore the stars; another human soul interested in science and thrilled with its wonder. As a fellow human, he was more than happy to encourage this desire, as we still should with each other. Science literacy is our "most precious thing," and paramount to effective governance as a democratic republic in a society and a world only increasing in complexity.

"The Path to Freedom" is the title of the 21st chapter to Dr. Sagan's "The Demon-Haunted World: Science as a Candle in the Dark" (ironically coinciding with this century). The entire book is a course in critical thinking; a discourse in logic and reasoning. This particular chapter was so profound, so significant I transcribed an excerpt and embed it below (a link on some platforms), giving its proper credit to Sagan and his lucid thoughts as he'd penned them. I encourage you to buy a copy of the book, available in paperback and e-book format. A quote from the excerpt: "In evaluating these facts, we must be careful not to improperly deduce causation from correlation" should hopefully encourage you to go deeper in the text and perchance download the book at the link provided. As storyteller and science advocate, especially in our current struggles with myriad pseudoscience, he is sorely missed.

Science as a human enterprise has had its foibles and failings (the atomic bomb; the pseudoscience of eugenics) but the Scientific Method makes it remarkably, and thankfully self-correcting.

Science is our candle in the dark; our Nyota Uhura ("freedom star") that lights our way true north on a path to freedom out of willful ignorance into a shared future and a hope...if we would only allow it.

But I have understanding as well as you;
I am not inferior to you.
Indeed, who does not know such things as these? Job 12:3

Related links:
Seth McFarland's 'Cosmos' gets its closeup
8 of the Most Fascinating Items From Carl Sagan's Personal Archives
(a letter to a young Mr. Neil deGrasse Tyson in 1975 being one of them)

I'll let "Frederick Bailey" explain the rest, and challenge us all to strive towards science literacy (my apologies for the 'good' Captain Auld's language).

Chapter 21 - The Path to Freedom
Posted by physics4thecool at 4:00 AM