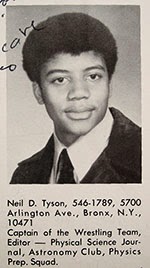 When I was in elementary school in the public schools of New York City, I distinctly remember that it was important for me to be athletic — in particular, to be able to run fast. I was encouraged by all around me. My reward was the respect and admiration of classmates and especially my streetmates.

In junior high school it was important for me, now that I was certiﬁed the “fastest on the block,” to slam-dunk a basketball. To do this you have to jump high and palm the basketball. On April 17, 1973, I was the ﬁrst in my grade to slam-dunk a basketball. I then asked myself, “Is this all there is to it?” The answer is basically yes, yet one can imagine creative variations such as a 360-degree pirouette in midair preceding the dunk, but you still score only two points.

About the same time, I learned that light, traveling at 186,282 miles per second, moves too slowly to escape from the event horizon of a black hole. This was more astonishing to me than a 360-degree slam-dunk. I soon became scientiﬁcally curious and read everything I could ﬁnd about the universe. I began to see myself as a future scientist — in particular, an astrophysicist. It became a deeply seated dream.

I shortly came to the shattering awareness that few parts of society were prepared to accept my dreams. I wanted to do with my life what people of my skin color were not supposed to do. As an athlete, I did not violate society’s expectations since there was adequate precedent for dark-skinned competitors in the Olympics and in professional sports. To be an astrophysicist, however, became a “path of most resistance.” I began to wonder whether I originally wanted to be an athlete more from society’s interest rather than my own. My brother, Stephen, today a professional artist, could run faster and jump higher than I could. He, too, felt these forces of society.

In high school, nobody probed further about how I became captain of the wrestling team. But when I became editor-in-chief of my school’s annual Physical Science Journal, my qualiﬁcations were constantly queried. And when I was accepted to the college of my choice, I was continually asked for my SAT scores and grade point average. Indeed, one fellow student, who worked in the ofﬁce of the guidance counselor, threatened to ﬁnd the ﬁle in the school records to read my scores himself, if I didn’t tell.

When I ﬁrst entered graduate school, before transferring to Columbia, I was eager to pursue my dreams of research astrophysics. But the ﬁrst comment directed to me in the ﬁrst minute of the ﬁrst day, by a faculty member whom I had just met was, “You must join our department basketball team.” As the months and years passed, faculty and fellow students, thinking that they were doing me a favor, would suggest alternative careers for me.

“Why don’t you become a computer salesman?”

“Why don’t you teach at a community college?”

“Why don’t you leave astrophysics and academia? You can make much money in industry.”

At no time was I perceived as a future colleague, although this privilege was enjoyed by others in graduate school.

When combined with the dozens of times I have been stopped and questioned by the police for going to and from my ofﬁce after hours, and the hundreds of times I am followed by security guards in department stores, and the countless times people cross the street upon seeing me approach them on the sidewalk, I can summarize my life’s path by noting the following: in the perception of society, my athletic talents are genetic; I am a likely mugger-rapist; my academic failures are expected; and my academic successes are attributed to others.