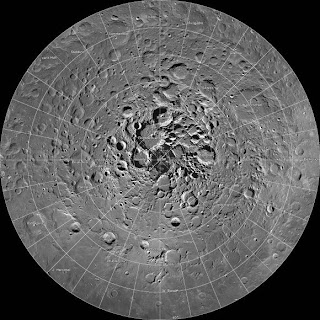 On 18 June 2009, NASA launched the Lunar Reconnaissance Orbiter (LRO) to map the surface of the Moon and collect measurements of potential future landing sites as well as key science targets. After two and a half years in a near-circular polar orbit, LRO entered an elliptical polar orbit on 11 December 2011 with a periapsis (point where the LRO is closest to the surface) near the south pole, and the apoapsis (point where LRO is furthest from the surface) near the north pole. The increased altitude over the northern hemisphere enables the two Narrow Angle Cameras (NACs) and Wide Angle Camera (WAC) to capture more terrain in each image acquired in the northern hemisphere. As a result, the Lunar Reconnaissance Orbiter Camera (LROC) archive now contains complete coverage from 60°N to the north pole (except of course for areas of permanent shadow) with a pixel scale of 2 meters.

The LROC team assembled 10,581 NAC images, collected over 4 years, into a spectacular northern polar mosaic. The LROC Northern Polar Mosaic (LNPM) is likely one of the world’s largest image mosaics in existence, or at least publicly available on the web, with over 680 gigapixels of valid image data covering a region of the Moon (2.54 million km², 0.98 million miles²) slightly larger than the combined area of Alaska (1.72 million km²) and Texas (0.70 million km²) -- at a resolution of 2 meters per pixel! To create the mosaic, each LROC NAC image was map projected on a 30 m/pixel Lunar Orbiter Laser Altimeter (LOLA) derived Digital Terrain Model (DTM) using a software package called Integrated Software for Imagers and Spectrometers (ISIS). A polar stereographic projection was used in order to limit mapping distortions when creating the 2-D map. In addition, the LROC team used improved ephemeris provide by the LOLA and GRAIL teams and an improved camera pointing model to enable accurate projection of each image in the mosaic to within 20 meters.

NASA: Lunar Reconnaissance Orbital Camera
Posted by physics4thecool at 4:00 AM