Google is honoring chemist Percy Julian with a homepage doodle that celebrates his contributions to the field, particularly his synthesis of a compound found in the African Calabar bean, which was used to treat glaucoma. 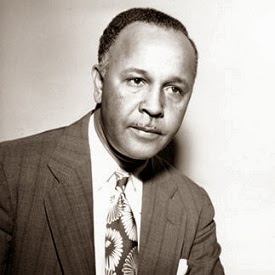 The doodle, which celebrates Julian's 115th birthday, features him surrounded by beakers, mathematical equations, and that famous bean.

Julian was born in 1899 in Alabama. As an African-American, segregation laws prevented him from pursuing an education beyond eighth grade, particularly one that was heavy in the sciences. But with some persistence, he was admitted into DePauw University in Indiana, where he graduated with honors in 1920, according to a PBS biography.

Though his white classmates were awarded placement in master's or Ph.D. programs, Julian was not and instead became a chemistry professor at Fisk University in Nashville. Eventually, he secured a fellowship at Harvard, and earned a master's degree in 1923, according to the Chemical Heritage Foundation.

Still, prejudice prevented him from landing a teaching assistant position at Harvard so he left for the West Virginia Collegiate Institute and was later made head of the chemistry department at Howard University, the CHF said. By the 1930s, he relocated to Vienna and earned a Ph.D. in chemistry, only the third to be awarded to an African American at the time.

It was then that his work truly started to pick up. Working with Josef Pikl, Julian synthesized physostigmine within the African Calabar bean, which was used to treat glaucoma. But after a string of racially motivated rejections in academia, Julian made the leap to the private sector and joined The Glidden Paint Company, the CHF noted, to find new uses for soy beans. He excelled, coming up with - among other things - a food supplement, a fire-retardant used during World War II, and a cheap way to produce a substance that allowed for affordable production of human hormones like progesterone. Other accomplishments include a synthetic, and more affordable, version of cortisone.