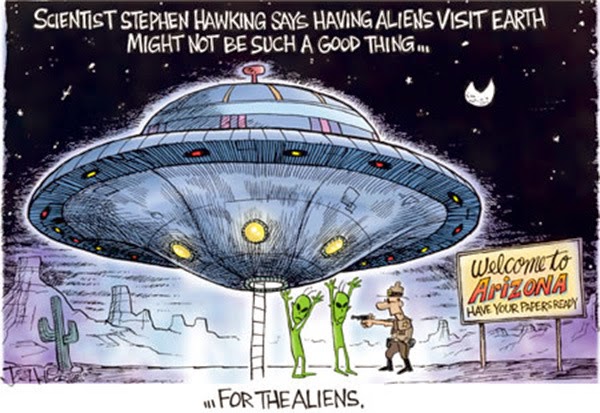 Enrico Fermi, when asked about intelligent life on other planets, famously replied, “Where are they?” Any civilization advanced enough to undertake interstellar travel would, he argued, in a brief period of cosmic time, populate its entire galaxy. Yet, we haven’t made any contact with such life. This has become the famous "Fermi Paradox”.

Various explanations for why we don’t see aliens have been proposed – perhaps interstellar travel is impossible or maybe civilizations are always self-destructive. But with every new discovery of a potentially habitable planet, the Fermi Paradox becomes increasingly mysterious. There could be hundreds of millions of potentially habitable worlds in the Milky Way alone.

So why don’t we see advanced civilizations swarming across the universe? One problem may be climate change. It is not that advanced civilizations always destroy themselves by over-heating their biospheres (although that is a possibility). Instead, because stars become brighter as they age, most planets with an initially life-friendly climate will become uninhabitably hot long before intelligent life emerges.

The Earth has had 4 billion years of good weather despite our sun burning a lot more fuel than when Earth was formed. We can estimate the amount of warming this should have produced thanks to the scientific effort to predict the consequences of man-made greenhouse-gas emissions.

These models predict that our planet should warm by a few degrees centigrade for each percentage increase in heating at Earth’s surface. This is roughly the increased heating produced by carbon dioxide at the levels expected for the end of the 21st century. (Incidentally, that is where the IPCC prediction of global warming of around 3°C centigrade comes from.)

Space.com:
Why Haven't We Encountered Aliens Yet? The Answer Could be Climate Change, David Waltham
Posted by physics4thecool at 4:00 AM