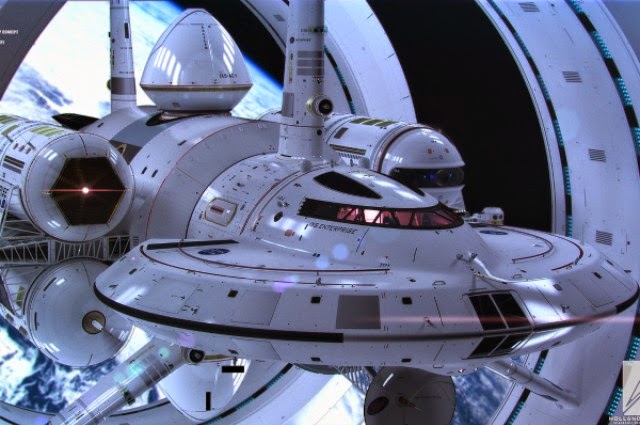 ...whether or not we achieve it, it is fascinating that we're giving science discussions on it! Besides, this KILLS any previous designs of starships (without being too far off as well).

Instead of nacelles, it looks like we'd have two hoops enclosing the vessel. No "pivoting at Warp 2" recommended...see the video presentation below.

The dilemma can be summed in this humorous meme (not meant to insult anyone, but if you do a Google search, it's likely to come up):


The science behind the humor: it took about as much fuel as the shuttle weighed to get it into orbit. Fuel would then be spent (emptied), and Newtonian mechanics - momentum and gravitational pull of planets mostly - would be the predominate force moving a craft forward.

The only interstellar vehicle that's left our solar system is Voyager 1 on August 25, 2012, launched in 1977 when I was decidedly (blessedly) in high school. With abs...and hair on my head...

35 years is a long time for a one-way trip. NASA is attempting to reduce such journeys to a human lifetime, and maybe make it a round trip. Even 1/10 c (the speed of light) would be a civilization-changing accomplishment.

Look at the picture above. Nope, it’s not a snapshot of a Star Wars scene, or any other sci-fi movie. It’s what you get if you combine a NASA physicist working on achieving faster-than-light travel with a 3D artist, and the result is freaking AWESOME. And yes, you heard correctly, there are scientists working on faster-than-light travel, and this is what the ship could look like in the future.