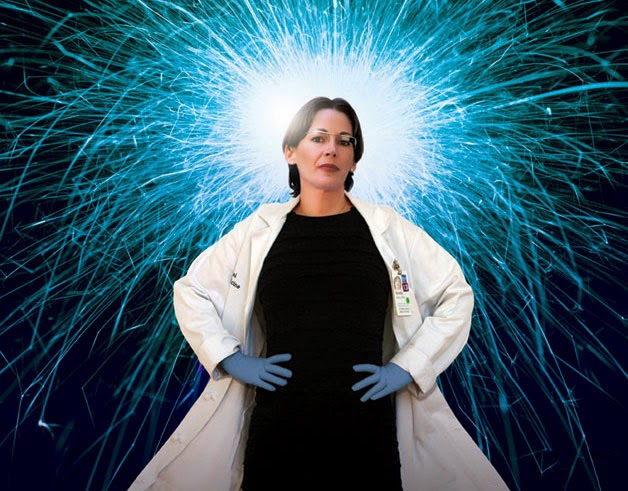 From the image source at Nature:

"Science remains institutionally sexist. Despite some progress, women scientists are still paid less, promoted less frequently, win fewer grants and are more likely to leave research than similarly qualified men. This special issue of Nature takes a hard look at the gender gap — from bench to boardroom — and at what is being done to close it."

Unfortunately, the world is not like Star Trek, populated with fictional Captains like Kathryn Janeway of this inspiring description:

"This subject's penchant for the scientific method and clear-cut choices has given her a healthy dose of skepticism, which usually provides a command asset in dealing with new situations. Her preference for difficult studies is self-traced back to childhood, when she would prefer that to outdoor play. Since then, she has indicated no pleasure in outdoor camping, hiking, or cooking." StarTrek.com

I follow a blog: Female Science Professor. The author describes herself as a full professor, and other than staying anonymous (probably important around review time) she's very frank about the biases encountered both from colleagues and students: her most resent post, a student in class evaluation said "You should improve your teaching methods." The prof made lemons into lemonade and blogged about it. The genders of her students - like her own identity - were left nebulous.

Diversity: an ideal we all agree sounds good on paper, but are reluctant to do the heavy lift to achieve it (see Nature excerpt). Even in politics: our current president as probability represents 2.3% of the general population of Chief Executives from George Washington to himself. However, disrespect of the office and obstruction of his agenda approaches Guinness World Record levels as he's being sued for using Executive Orders - the least of any president according to official archives and math - essentially the pre-pubescent, sidewalk-flailing public tantrum of a desperate orange man being any Executive Order above zero.

Women and minorities are not only underrepresented in the sciences, they are openly discouraged from pursuing STEM careers at the university level and at early life stages. I was personally insulted by my middle school science teacher - "No, you big dummy!" - after asking a question about calculating the coefficient of linear expansion on a metal wire. I had stifled the immediate urgent need at that moment to deck him, confident of the outcome with the authorities if I had. My parents were not amused, and scheduled a visit with the principal. That was followed by a sweaty, self-preserving "apology" from the science teacher. I passed his class with a descent grade, and moved on from the twerp. The fact both groups are so low means discouragement is remarkably efficient to maintain the status quo of the "usual suspects" in the sciences, and a concentration of wealth and opportunities along gender and cultural lines. Suffice to say, to resist the "haters": you have to want it!

Albert Einstein was so fond of answering the fan mail of children interested in science, author Alice Calaprice wrote a book on it. In an exchange with a young science fan from South Africa named Tiffany:

September 19, 1946: "I forgot to tell you, in my last letter, that I was a girl. I mean I am a girl. I have always regretted this a great deal, but by now I have become more or less resigned to the fact. Anyway, I hate dresses and dances and all the kind of rot girls usually like. I much prefer horses and riding. Long ago, before I wanted to become a scientist, I wanted to b e a jockey and ride horses in races. But that was ages ago, now. I hope you will not think any the less of me for being a girl!"

To which, Einstein's reply was classic, and classy (circa October 1946):

"I do not mind that you are a girl, but the main thing is that you yourself do not mind. There is no reason for it."


Carl Sagan pointed out there is an excellent correlation between poverty for women and high birthrates, whether the country is defined by religion - Christian, Hindu, Irreligious,  Muslim, etc. That would suggest access to birth control increases the wealth of women and nations, unless you're a Corporation-Person that can presumably give obeisance from bricks to deity. Or, you're five male, activist Catholic Supreme Court Justices intent on cramming their Neanderthal viewpoints down everyone's throats. The caveat emptor is in dismantling the legal fiction and protections forming corporations give. Someone is going to sue a business in the future siting this so-called ruling, coming after the owner or owner's personal wealth also. Slippery slopes forge unintended pathways.

Minorities (an ironic label for the majority of the Earth's population) at least numerically in this country are hampered by generations of specifically-designed social engineering; castigated for not competing in rigged "rights" of citizenship (like voting); when the value of property plummets at their presence; the neurological harmful effects of leaded plumbing in East Austin and other areas not addressed until gentrification (and now I see climate effects); globalization and technology eliminating previous decent-paying jobs, doubled unemployment rates and the obvious differences dependent on which side of the tracks you were born (still) in education since Brown vs. Board. It's also interesting to see screeds on the Internet against the LGBT community, unbeknownst to the screed producer of the Turing Test for artificial intelligence, or that he's the reason we have in the lexicon "algorithm"; "computation"; "cryptography" (the essence of McAfee, Norton or any antivirus software), or as the father of Computer Science that we're typing on laptops at all. Not to mention the ugly, breathtaking displays of xenophobia at the border of California to children by the great-great-grandchildren of immigrants that have yet to recompense the Native Americans for the sins of Columbus.

We can have myriad months of celebrations that target specific groups and their contributions. It all disappears into the social, attention-deficit ether. Our discourse, our academia, our music, our self-governance; our sense of right-and-wrong (who goes to prison and who goes to rehab) will not change nor will we survive as a species until we see one another...as humans.