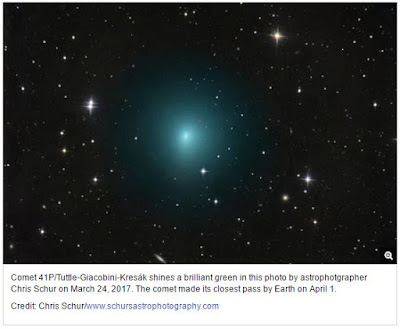 
A comet whose identity took nearly 100 years to pin down is making its closest approach to Earth today (April 1), just in time for April Fools' Day, but this is no cosmic prank. It is the comet's closest Earth encounter in more than 50 years, and maybe more than a century, NASA officials said.


Comet 41P/Tuttle-Giacobini-Kresák is named after its three discoverers —Horace Tuttle, Michael Giacobini and L'ubor Kresák — who tracked the comet separately over nearly a century.


Tuttle first spotted the comet in 1858, when 41P was first identified as a sun-orbiting (or periodic) comet, NASA officials wrote, citing the Cometagraphy website by Gary Kronk. But the length of the comet's orbit was unknown at the time. Comet 41P was rediscovered in 1907 by Giacobini, but still not tied to the object seen by Tuttle in 1858.


Another astronomer, Andrew Crommelin, later linked the two observations by Tuttle and Giacobini and predicted Comet 41P would return in 1928 and 1934, but the object went unseen, according to Cometography. It wasn't until 1951, when Kresák spotted the comet and linked it with the earlier observations, that Comet 41P identity was officially pinned down.