Fifth at the Center... 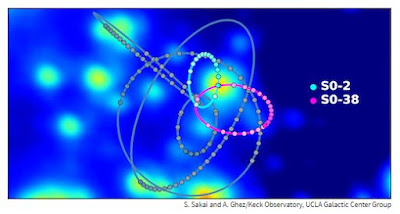 
General relativity has stood the test of time. But researchers are still exploring alternatives to the theory, attempting to unify gravity with other forces or to explain observations attributed to dark matter and dark energy. Many of these theories involve an additional force beyond the four known fundamental forces. Now, Andrea Ghez and Aurélien Hees at the University of California, Los Angeles, and co-workers, have analyzed the orbits of stars around the Milky Way’s center to derive limits on such a fifth force. While similar constraints had been obtained in weak gravitational fields, this is the first time fifth-force scenarios have been tested in a strong field, such as that created by the supermassive black hole at the center of our Galaxy. [1]

Our current understanding of the Universe states that it's governed by four fundamental forces: gravity, electromagnetic, and the strong and weak nuclear forces.


But there are hints of a fifth force of nature, and if it exists, we'd not only be able to fill the remaining holes in Einstein's general relativity - we'd have to rethink our understanding of how the Universe actually works. And now physicists have figured out how to put this mysterious force to the ultimate test.


It's all very neat and sensible, but there's a problem - in a lot of ways, gravity is the 'odd one out' in this very important group.


For one thing, gravity is the last of the four fundamental forces that humans haven't figured out how to produce and control.


It also doesn't appear to explain everything that it should - studies have shown that there's more gravity in our Universe than can be produced by all the visible matter out there. [2]

1. Synopsis: Restricting the Fifth Force, Matteo Rini
2. Physicists Are Probing The Centre of Our Galaxy to Find The Missing Fifth Force of Nature,
BEC CREW