Feeling the Shape of Molecules... 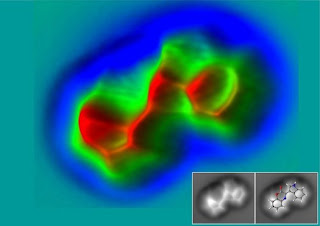 "The atomic-scale architecture of a complicated small molecule has been deduced by scanning and 'feeling' it, using a technique called atomic force microscopy.

"Reporting their work in Nature Chemistry[1], researchers have been able to distinguish between two possible molecular structures of a substance from a deep-sea bacterium by using a very fine needle-like tip to trace out the shape of the molecule lying on a crystal of salt.

"Determining the way that atoms are connected together in a molecule has previously relied on indirect methods, such as reflecting X-rays off crystals of the material (X-ray crystallography) or looking at how the atoms of the molecule absorb radio waves (nuclear magnetic resonance or NMR)."

See: The atomic structure of a small organic molecule can be revealed by atomic force microscopy.
Posted by physics4thecool at 8:39 AM