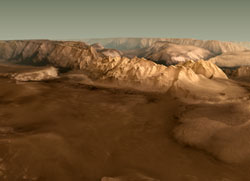 Grabens, dendritic valleys, lava flows and the highest known mountain in the Solar System—in the images from the German stereo camera on board the Mars Express spacecraft, the topography of the Red Planet appears so three-dimensional that you could walk through it. "For the first time, we can see Mars spatially—in three dimensions," says Ralf Jaumann, project manager for the mission at the German Aerospace Center (Deutsches Zentrum für Luft- und Raumfahrt; DLR). The spacecraft with the camera on board was launched on 2 June 2003. Since its arrival at Mars six-and-a-half months later, it has orbited the planet almost 12,000 times and provided scientists with unprecedented images. It has been used to gradually create a 3D image of Mars, enabling the planetary researchers to acquire new and surprising information about the climate and development of the Red Planet.

The High Resolution Stereo Camera (HRSC)—one of the most important instruments on the spacecraft—was pointed towards Earth while en route to Mars, providing the first evidence that it had survived the launch from Baikonur Cosmodrome. The camera took a test image of Earth and the Moon on 3 July 2003, from a distance of almost eight million kilometers. This was met with great relief at the DLR Institute of Planetary Research, which developed and is operating the camera. The next image was taken when the probe was still just 5.5 million kilometers from the Red Planet. The various features were visible as light and dark areas, and the ice cap at the South Pole appeared bright white.

R&D: On board Mars Express, in orbit around the Red Planet
Posted by physics4thecool at 4:00 AM