Magnets always have a north and south pole. In fact, when they're divided, they created new opposing poles. A north without a south pole or a south pole without a north pole has yet to be discovered. But now, a team of physicists have managed to create a new type of artificial monopole in a solid; essentially, they've produced a type of pole that doesn't possess an opposing force on its opposite end.


In order to create this seeming contradiction, researchers merged tiny magnetic whirls, known as skyrmions. These whirls influence the movements of the electrons in exactly the same manner as magnetic fields. For this reason, artificial magnet fields are used to describe these whirls as well as their influence on the electrons. At the point of merging these skyrmions, the physicists were able to create a monopole. 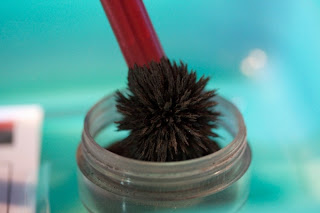