Genie Out of the Bottle... 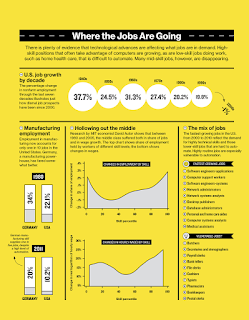 Given his calm and reasoned academic demeanor, it is easy to miss just how provocative Erik Brynjolfsson’s contention really is. ­Brynjolfsson, a professor at the MIT Sloan School of Management, and his collaborator and coauthor Andrew McAfee have been arguing for the last year and a half that impressive advances in computer technology—from improved industrial robotics to automated translation services—are largely behind the sluggish employment growth of the last 10 to 15 years. Even more ominous for workers, the MIT academics foresee dismal prospects for many types of jobs as these powerful new technologies are increasingly adopted not only in manufacturing, clerical, and retail work but in professions such as law, financial services, education, and medicine.


That robots, automation, and software can replace people might seem obvious to anyone who’s worked in automotive manufacturing or as a travel agent. But Brynjolfsson and McAfee’s claim is more troubling and controversial. They believe that rapid technological change has been destroying jobs faster than it is creating them, contributing to the stagnation of median income and the growth of inequality in the United States. And, they suspect, something similar is happening in other technologically advanced countries.

I talked about this here, here, here and here. Wrote a book about it (literally).

We're given ourselves self-serving mythologies of "shining cities on a hill"; "chosen nation"; pursue multiple choice exams over education, creationism/intelligent design and other made-up "controversies"; junk science in the halls of congress, #scamdals, chimeras and "created realities" because pursuit of poltergeists allow pols not to do their actual elected jobs of managing the commonwealth for the common good (i.e. redistricting = Zombie government).

Our technology is literally superseding our need for certain workers.

For example, when some of us just "couldn't do college" a generation ago, Americans could get a job in a factory - I'll use the automotive industry - and build a decent middle-class life for themselves and a family. A blue collar job might have been to use a drill on an assembly line for lug nuts, bolts, etc. Now, that's done by a robot that doesn't call in sick; doesn't need vacation; won't demand a retirement. Most hiring by US firms is abroad where pay is lower than our national minimum wage. The other good option was the military - recall it was a "peacetime force" post Vietnam.

I am not advocating slowing down, "crawling in a cave"; running for the hills. The genie is out of the bottle now, and we're debating (if you want to call it that) problems that have no impact. Period.

Our sense of the "American Dream" is changing daily, as should our definition of middle class, upper class and financial plasticity - the ability to move freely from class-to-class (hopefully upward). We've got the most expensive health care on the planet, and I've had two good friends - one my fraternity line brother - perish due to lack thereof: insurance is an expensive business with real casualties. Our living longer puts stress on geriatrics, resources and food supplies. Weather, whether you want to call it climate change or a rather heated solar cycle, is now part of what is briefed in the actual Situation Room. We either accept these realities, and prepare our children academically and morally for them: or, inherit the whirlwind of societal instability. This is Sky-net in slow-mo, and "The Hunger Games"; "Brave New World"  nor "1984" should not be a blueprint for our collective futures.

This book is about the possibility that Huxley, not Orwell, was right.

Neil Postman, "Amusing Ourselves to Death: Public Discourse in the Age of Show Business"

Technology Review: How Technology is Destroying Jobs
Posted by physics4thecool at 4:00 AM