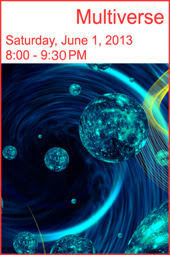 
Space.com: NEW YORK — Whether you believe our universe is unique or one of many coexisting realities, there's a scientific model that backs up your views. Cosmologists on both sides debated the issue June 1 here at the "Multiverse: One Universe or Many?" panel at the World Science Festival.


"Is the multiverse idea something that's implied by deficiencies in existing cosmological theories, or is it something some scientists need to help them explain certain unresolvable problems in existing theory?" journalist John Hockenberry asked, acting as moderator to scientists Andreas Albrecht, Alan Guth, Andrei Linde, and Neil Turok, who took the stage at New York University's Skirball Center for the Performing Arts.

The possibility of a multiverse is raised by the theory of cosmic inflation. This idea posits that the universe grew exponentially in the first fraction of a second following the Big Bang, expanding even faster than the speed of light. Some versions of this theory suggest that certain areas of the universe expanded faster than others, creating separate bubbles of space-time that might have developed into their own universes.

Science How Stuff Works: How Quantum Suicide Works
Posted by physics4thecool at 4:00 AM